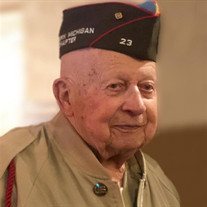 HOLLAND – Richard Rizzio Sr., age 93, formerly of Traverse City, passed away on Sunday, December 23, 2018 at his home in Holland, in the loving care of his children; Richard, Ken, Lynn, and Mike. Richard was born in Chicago, on March 4, 1925 to Thomas and Phyllis (Truesch) Rizzio. In July 1943 Richard was drafted into the United States Army where he honorably served his country during WWII. He arrived in Europe the following year to serve as a radio operator with the 274th Armored Field Artillery Battalion during the Battle of the Bulge. He was awarded the Silver Star and Purple Heart. He was a member of VFW Post #2780, American Legion, Military Coalition, and the Rolling Thunder. Richard was honorably discharged from the United States Army in 1945 and made his way back to Chicago, IL where he met his future wife, Marie Virginia Aguzino, and on August 20, 1949 the two were married. Richard and Marie started their family of four in Crystal Lake. It was when Richard took a job selling Folgers coffee that he and Marie moved the family to Arlington Heights. The Rizzio family then found their way to Marquette where they settled and raised their family. Every Sunday morning, you could find the Rizzio family in the same pew at First United Methodist Church where they were members for years. As Richard and Marie settled into retirement, they made the decision to move to Traverse City, where they were active members at Central United Methodist Church. Richard enjoyed hunting, fishing, and cooking as he and Marie competed in many cooking competitions together across the United States. Richard is survived by his sons; Richard Jr. (Joanie) Rizzio, Troy, Kenneth (Barbara) Rizzio, Holland, Michael (Patti) Rizzio, Marquette, daughter, Lynn (Ted) Kirkpatrick, Gwinn, grandchildren; Kathy (Rob) Mertz, Sarah (Bernie) Garlock, Stephanie (Derek) Huizinga, Chris Kirkpatrick, Lindsey (Nathan) Lee, and Eric Rizzio. Richard is also survived by his 5 great-grandchildren, as well as many nieces and nephews. Richard was preceded in death by his parents, wife, Marie, brothers; Raymond, Donald, and sisters, Vivian and Jean. Per Richard’s request cremation has taken place and a celebration of his life will take place at 3:00 pm on Saturday, December 29, 2018 at the Reynolds-Jonkhoff Funeral Home, with a visitation one hour prior to the service. Pastor Chris Lane will officiate. In lieu of flowers the family asks that memorial contributions be directed to; Operation Injured Soldiers, 10079 Colonial Industrial Drive, South Lyon, Michigan 48178, or Tight Lines for Troops, P.O. Box 274, Manistee, MI 49660.

HOLLAND &#8211; Richard Rizzio Sr., age 93, formerly of Traverse City, passed away on Sunday, December 23, 2018 at his home in Holland, in the loving care of his children; Richard, Ken, Lynn, and Mike. Richard was born in Chicago, on March... View Obituary & Service Information

The family of Richard Rizzio Sr. created this Life Tributes page to make it easy to share your memories.