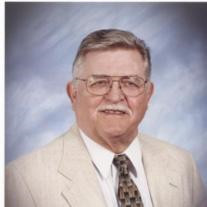 Traverse City-Richard W. "Dick" Shumsky, 80, of Traverse City, died Tuesday afternoon, December 18, 2012 at his home in the company of his adoring family. Born January 3, 1932 in Suttons Bay, he was the son of the late George and Rachel (Borgerson) Shumsky. On May 21, 1994 at St. Francis Catholic Church in Traverse City, he married the former Mary Helen Sajdak. He retired from Consumers Power Company in l994 as the Head Storekeeper. Dick was a long time member and usher at St. Francis Catholic Church. He also enjoyed his participation with St. Francis Knights of Columbus. As his hobbies he liked fishing, hunting, golfing and playing Euchre. He also relished being surrounded by his large loving family. He is survived by his wife, Mary H. Shumsky, of Traverse City; daughter Patricia (Daniel) Greene, of Jackson, MI; son, Richard (Sally) Shumsky, Jr., of Sanford, FL; daughter, Betsy Palmer, of Sandford, Fl; daughter, Connie (William) Perkins, of Deltona, FL; step-daughter, Michelle Brockie, of Traverse City; step-daughter, Nicole (Terry) Mattson, of Grand Junction, CO,; step-daughter, Stephanie Day, of Traverse City; 23 grandchildren; 11 great grandchildren; two sisters, Gloria Tafelsky, of Suttons Bay and Emma (Anthony "Tony") Stayer, of Suttons Bay; along with many nieces and nephews. In addition to his parents, he was also preceded in death by a brother, Raymond Shumsky; sister, Ruth Currie and a grandson, Tyler Day. Friends may call at the Reynolds-Jonkhoff Funeral Home on Thursday, December 20, 2012, from 4:00 P.M. to 7:00 P.M., where the Shumsky Family will receive friends. A Funeral Mass will be offered at St. Francis Catholic Church on Friday, December 21, 2012, at 4:00 P.M. with visitation one hour prior to the service. Rev. Kenneth Stachnik will serve as the celebrant. Burial will take place at St. Michael's Catholic Cemetery at a later date. In remembrance of Dick, memorials may be directed to St. Francis Knights of Columbus or Munson Hopice. Envelopes may be obtained either at the funeral home or church. Kindly share your memories with the family on their on line guestbook at www.reynolds-jonkhoff.com Arrangements were made with the Reynolds-Jonkoff Funeral Home and Cremation Services.

Traverse City-Richard W. "Dick" Shumsky, 80, of Traverse City, died Tuesday afternoon, December 18, 2012 at his home in the company of his adoring family. Born January 3, 1932 in Suttons Bay, he was the son of the late George and Rachel... View Obituary & Service Information

The family of Richard Wayne Shumsky, Sr created this Life Tributes page to make it easy to share your memories.