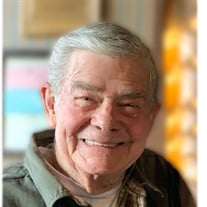 Traverse City - Richard Frederick “Rick” Soderberg passed away peacefully on Sunday, May 10, 2020 surrounded by loving family. Rick was 79. Rick was born to Hubert and Dorothy Soderberg (née Larson) on February 5, 1941 in Springfield, Illinois. As the family moved with his father’s work, Rick graduated from Eastern High School in Lansing, MI. Afterwards, he honorably served our country with the U.S. Army working with the Nike Hercules Warhead Support Team in Niagara Falls, NY. It was during this time he met Sue Ann Johansson and they were united in marriage in Tonawanda, NY on February 19, 1966. Together they celebrated 54 years of marriage and their daughter Tracy. During his working years, Rick was a parts manager in the automotive industry. Rick thoroughly enjoyed spending summers boating on Lake Michigan on his boat Rapsodie. Other hobbies included hunting, fishing, and traveling. These travels included a trip to Alaska and spending winters in Florida. Rick will be fondly remembered for his long stories, his ability to fix most anything, a curiosity for local history, and talent for cooking. Rick is forever loved by his wife Sue, daughter Tracy (Jim) Holmes, grandchildren of Jack, Olivia, and Ethan Holmes, brother Randy (Kathy) Soderberg, and a fond uncle to many nieces and nephews. He is preceded in death by his parents. Those wishing to make gifts of remembrance are asked to consider the Botanic Garden for the upkeep of the Bluestar Memorial. Due to current circumstances, a live webcast of Rick’s funeral service will be held on Thursday, May 14, 2020 at 11 a.m. through the Reynolds-Jonkhoff Funeral Home. Family and friends may watch online at www.rjfh.tv. A public celebration of life will be held later in the summer. Share a memory of Rick at www.reynolds-jonkhoff.com . Rick and his family are in the care of the Reynolds-Jonkhoff Funeral Home and Cremation Services.

The family of Richard Frederick "Rick" Soderberg created this Life Tributes page to make it easy to share your memories.