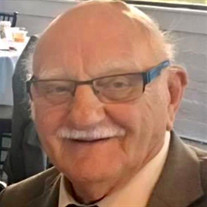 TRAVERSE CITY – Richard (Dick) Stempien, age 86, formerly of Elk Rapids passed away at his home in the loving care of his family on Friday, November 27, 2020. Richard was born on June 21, 1934 in Detroit, MI to the late Adam and Lillian Stempien. Richard, born and raised in Detroit went on to attend the Roosevelt Military Academy in Aledo, IL. After military school, Richard served in the United States Army towards the end of the Korean War where he was stationed in Japan. He was honorably discharged in June of 1955. Following his time in the military, Richard went to work for Ford Motor Company in the engineering sector of the company located in Dearborn, MI. Richard met the love of his life, wife Patricia (Beaty) in Detroit and the two were married in December of 1957 having four children; Michael, Patricia, James, and Kelly. Together, Richard and Pat enjoyed conducting estate sales with their company, Certco Estate Sales. Antiquing was one of Richard and Pat’s great passions in life. They were prior co-owners of an antique mall located in Elk Rapids. During his lifetime, Dick served the public as a Westland city Councilman and a member of the planning commission. He was also a commander in the VFW. Dick was an avid tennis player, loved going to the casino and playing cards, especially poker, with his buddies. Richard and Pat had 24 active retirement years together dividing their time between Michigan and Arizona where they have a wonderful fun group of friends. Between Michigan summers and Arizona winters, they had the best of both worlds. Richard is survived by his wife of 63-years, Pat, his four children; Michael (Ren) Stempien, Patricia (Larry) Johnson, James (Janice) Stempien, Kelly Hopkins, along with his grandchildren; Jack, Valerie, Caroline, Melanie, Maria, Mason, Nikki, Jaylin, Ryan, Dana, Max, Drew, Jen & Zack. And many great grandchildren to whom he was their loving GP. He is also survived by his brother, Leonard (Debbie) Stempien. Richard was preceded in death by his parents, Adam and Lillian, his sister, Susie, his brother, Don, and beloved grandson Jake. A celebration of Richard’s life will take place at a later date.

TRAVERSE CITY &#8211; Richard (Dick) Stempien, age 86, formerly of Elk Rapids passed away at his home in the loving care of his family on Friday, November 27, 2020. Richard was born on June 21, 1934 in Detroit, MI to the late Adam and Lillian... View Obituary & Service Information

The family of Richard Stempien created this Life Tributes page to make it easy to share your memories.