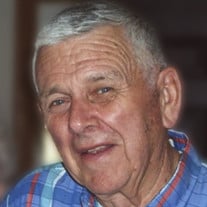 Richard Lee Wooters, 80, of Kingsley, died Saturday, July 05, 2014 at Munson Hospice House in Traverse City. Dick was born on Sunday, December 03, 1933 to the late Harold and Wilhelmina (Wheelock) Wooters in Traverse City. He graduated from Traverse City Central. Dick married the former Beverly Ann Ramsey on Saturday, August 16, 1952 in Traverse City. She preceded him in death September 20, 2011. Dick had been employed as the head of maintenance for Consumers Energy, retiring in 1988.. Never being one to sit still, Dick always kept busy. He loved the out of doors, golfing, traveling, snowmobiling, especailly taking color tours. He especially enjoyed visiting the Soo Locks to watch the freighters, playing euchre with friends, enjoyed Tiger baseball, the Lions, Red Wings Hockey, and the Beach Bums. In the last couple of years, Dick met Donna Martin, whom he adored and to whom he was to be married next weekend. Dick was a council member of the Village of Gkingsley, a charter member of the Kingsley Lions Club, Summit City Grange, Kingsley Senior Center, and served on the Paradise Township Board of Review. Dick was recently baptized and was a member of St. Michael Lutheran Church. Dick is survived by his children, Linda Findley of Kingsley, Tim (Ruth) Wooters of West Columbia, TX, Brian (Kari) Wooters of Traverse City, 6 grandchildren, his fiancée Donna Martin of Traverse City and his brothers, Ron (Joyce ) Wooters of Traverse City and Pete (Jo) Wooters of Petoskey, along with nieces and nephews. Visitation for Dick will begin at 10 a.m. Friday, July 11 at The Reynolds-Jonkhoff Funeral Home, The memorial service will begin immediately following at 11 a.m., also at the funeral home with Pastor Jim Nihiser officiating. Inurnment will take place at Grand Traverse Memorial Gardens. Rather than flowers, memorial contributions may be directed to The Rock in Kingsley. Please share your memories and condolences with Dick's family by way of his online guest book at www.reynolds-jonkhoff.com. The family is being served by Reynolds-Jonkhoff Funeral Home and Cremation Services.

The family of Richard Lee Wooters created this Life Tributes page to make it easy to share your memories.