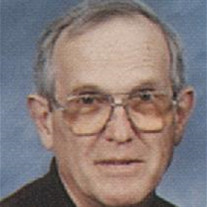 ALMA - Richard Elton Yarick, 79, of Alma and formerly Lake Ann, passed away Tuesday, April 21, 2015, at Masonic Pathways in Alma. Dick was born on Thursday, October 24, 1935, in Toledo, OH, to the late John and Mabel "Grace" (Smith) Yarick. He married Virginia Mary Wagner on March 7, 1959, in Monroe, MI. Dick and Virginia and the girls lived in Toledo, OH, until moving to Mio, MI, where they owned and operated a family restaurant for several years. Dick also managed Sachs Lumber Company in Mio for a time. Dick and Virginia moved back to Ohio and lived in Wooster for several years before retiring and once again moving north, settling in Lake Ann. Dick was a member of Lodge 596 of Free and Accepted Masons in Mio, and a member of Lake Ann United Methodist Church. He was a gifted craftsman, completing multiple projects that involved both restoring family heirlooms and antiques, and building custom furniture, such as various tables, entertainment centers and a jewelry box. Many of these pieces were made for family members and for Lake Ann UMC. Dick was also veteran, having served as a member of the U. S. Navy. Dick is survived by his wife Virginia, daughters, Gayle Yarick of Lebanon, TN; Annette (Patrick) Kendziorski of Lake Leelanau; granddaughters, Amy, Cari and Ellen, great grandson, Jack, brothers, Philip (Annie) of Santa Fe, NM; Jon (Joyce) of Lambertville, MI; and Neil (Joyce) of Traverse City; several nieces and nephews, and constant companion, his faithful collie, DJ. Dick, was preceded in death by his parents. A memorial service celebrating Dick's life will take place at 11 a.m. Monday, April 27 at the Reynolds-Jonkhoff Funeral Home, with visitation one hour prior to the service. The Rev. Chuck Towersey will officiate. Interment will take place at Lake Ann Cemetery at a later date. For those who would wish to remember Dick through a memorial contribution, please consider the Lake Ann United Methodist Church. Please share your thoughts, memories, and condolences with Dick's family by way of his online guest book at www.reynolds-jonkhoff.com The family is being cared for by Reynolds-Jonkhoff Funeral Home and Cremation Services.

The family of Richard E. Yarick created this Life Tributes page to make it easy to share your memories.