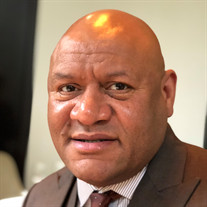 Mr. Rickey Lane McWhorter passed comfortably at Munson Hospice House on February 4, 2020 after a brave but ultimately frustrating battle with cancer. Always on his own schedule, he waited until his husband Tom had left to tend to their furry children after having spent the night together. Rickey was born on October 3, 1965 in Statesville, North Carolina to parents Ernestine McWhorter Moser and Robert Miller having arrived, of course, in a breech presentation. He grew up in the foothills of the Appalachians, surrounded by the love of his hard-working family. He often spoke fondly of these memories including teaching himself to read with the help of the farm animals and stealing watermelons from the fields of his maternal grandmother, Ina, with whom he enjoyed a special bond. He graduated with Honors from Alexander Central High School and completed his degree in Culinary Arts from Central Piedmont College achieving Honors there, as well. He had a special knack for baking, parlaying this talent into supplying his wonderful cheesecakes to various Charlotte restaurants and winning “Best Desserts in Charlotte” for three years running. He managed several restaurants in Charlotte before joining Starbucks in various management roles initially in Charlotte and later in Milwaukee, Wisconsin. Rickey had a unique talent for marketing and used innovative strategies which turned profit-losing stores into million dollar producers. He was loved by his staff and often cooked breakfasts to reward them for their hard work. He completed Pharmacy Technician training at Everest College in Milwaukee and used his culinary talents in compounding. Family members were “rewarded" at holidays with jars of “Happy Butt Cream” specially mixed by Rickey. Most recently, he worked for Munson Hospital taking pride in his work in the NICU pharmacy where he gave excellent care to his “babies.” Rickey met his husband, Tom Harding, in 1997 in the restaurant he managed in Charlotte while Tom was interviewing for a position as a psychiatrist. Tom sensed some flirtation occurring and cheekily asked what Rickey (seven years his junior) had bought him for his recent birthday. Rickey quickly replied: “A walker with wheels!” which evidently sealed the deal as the two were together for the next 23 years. Tom, a state champion in high school debate, was no match for Rickey’s special talents in verbal sparring. He often quipped that "in 23 years they only have had one fight…which has lasted for 23 years." They travelled extensively throughout the world fondly recalling their trips to Alaska, Hawaii, Brazil, Peru, Argentina, South Africa, New Zealand, China, Thailand, and throughout Europe. They often joked about their special closeness during these expeditions as they no longer had to argue about chores having a maid to clean up their messes. As a couple, they rescued multiple cats and dogs giving each welcoming homes throughout their years. When it became legal, they married on a beach on the Big Island of Hawaii, surrounded by friends and family on December 4, 2015, which Tom recalls as "the best day of my life." Rickey had a special talent for having never met a stranger. Though his cousin Teshia once said “Rickey could talk to a stop sign,” Rickey would not only talk to that stop sign but invite it home for dinner and bake it a cheesecake. He was the glue responsible for uniting a disparate group of strangers in Traverse City into a close knit band of forever friends organized by Den Mother, Jill, whom Rickey affectionately called “Mama.” As a testimony to Rickey’s ability to quickly build lifetime friendships, condolences have come in from around the world written by individuals sometimes met only briefly during one of their voyages. Surviving Rickey are his loving partner, Tom Harding, their furry kids, Roxie, Chaz, Rain, and Adango, and mother, Ernestine Moser of Stony Point, NC. He was predeceased by father, Robert Miller of North Carolina. Rickey is also survived by brothers Charles (Scott) McWhorter of Indiana, Kenny Miller and Jeren Parker of North Carolina, sisters Sherry Miller, Sharon Miller, Pam Miller of North Carolina, Aunts Juanita Driver, Bernice McWhorter, Pam McWhorter, Lou Ann Watts, Doris McDowell, and Connie McClain of North Carolina. He is further survived by a plethora of cousins (who were essentially his siblings in childhood) including: Thomas Miller, Mark Anthony McWhorter, Gail Scott, Darleen Sherrill, James Watts, Carla Watts, Dale Watts, Teshia Driver, John Driver, Jr., Tianrae Driver, Delane McWhorter, Monique Byers, Priscilla Jenkins, Caroline McClain, Christopher McClain, India McWhorter, Genesis McWhorter, and Cierra McWHorter all of North Carolina. He is also survived by brother-in-law William Harding, his wife, Jean, and loving nephew Alex of Michigan, special friend Pauline Maclean of Wisconsin, co-workers Julia Stathakis, Peter Bivona and Jason Pryor of Munson Hospital, and band of miscreants Jill and Scott Slagal, Matt Fitzsimmons, Leah Lane, Bruce Ahlich, and Matt Olson all of Traverse City. He is further survived by a host of friends in Traverse City, Wisconsin, North Carolina, and around the world. A visitation will take place on Friday February 14, 2020 at the Reynolds Jonkhoff Funeral Home from 5-7pm. A memorial service honoring Rickey will take place on Saturday February 15, 2020 also at the funeral home at 11:00am with visitation from 10:00am until the time of the service. Deacon Ron Rowe will officiate. As a special request to honor Rickey’s loving nature, attendees are encouraged to bring him a Valentine’s card recalling a special moment you had shared together. These will give great comfort to his husband and family over the coming days. Please visit www.reynolds-jonkhoff.com to share your memories with the family. Those wishing a more permanent expression of sympathy may chose to do so in Rickey’s honor to either the Music House or the Great Lakes Humane Society. Rickey and his family are being cared for by the Reynolds Jonkhoff Funeral Home and Cremation Services.

Mr. Rickey Lane McWhorter passed comfortably at Munson Hospice House on February 4, 2020 after a brave but ultimately frustrating battle with cancer. Always on his own schedule, he waited until his husband Tom had left to tend to their furry... View Obituary & Service Information