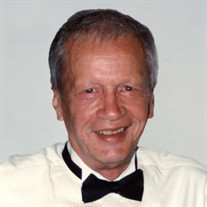 Our beloved father, Rinehart Sloan, passed away Monday, November 30, 2020 at Southridge Assisted Living in Traverse City, joining his forever love and our dear mother in the heavenly realms. Born on Saturday, January 17, 1931 he was one of two children born to the late Roy and Lona (Matney) Sloan in Pikeville, KY. He served our country as a member of the U. S. Army and the U. S. Army Reserves from February 19, 1951 until April 29, 1964, attaining the rank of SFC E-7. On April 15, 1953, he took as his bride, Gerda Theil. They were married in Frankfurt, Germany. They then moved to the United States where they raised a beautiful family of two daughters and one son. Rinehart worked as a experimental model maker for the General Motors Tech Center, and eventually moved into a management position there until his retirement. He and Gerda moved to the Traverse City area in 2003 to be near family. Rinehart enjoyed camping with his family as well as fishing. He owned and flew a Seabee airplane and would often fly his family to Higgins Lake. His daughters were Highland Dancers and his son was a bagpiper and so he drove them to countless competitions around the state and cheered them on in their endeavor. Surviving Rinehart are his beloved children, Lars Sloan and Glynnis Price both of Traverse City, and Romy Sloan (Howard) Anderson of Virginia; his dear grandchildren, Carleigh Michael (Luke) Seaborn, Cullen Earl Anderson and Carys Mackenna Anderson. He was preceded in death by his parents, his dear wife, Gerda, son-in-law John J. Price and a sister Alice Lear. The family will celebrate Rinehart's life in an intimate family gathering. For those desiring to remember him through a memorial contribution, the family would suggest Heartland Hospice, 4020 Copper View #113, Traverse City, MI 49684 who provided care to Rinehart in his last days.

Our beloved father, Rinehart Sloan, passed away Monday, November 30, 2020 at Southridge Assisted Living in Traverse City, joining his forever love and our dear mother in the heavenly realms. Born on Saturday, January 17, 1931 he was one of... View Obituary & Service Information

The family of Rinehart Sloan created this Life Tributes page to make it easy to share your memories.