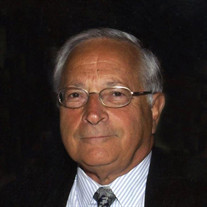 Robert John Bacigalupi, 83, of Williamsburg and Delray Beach, FL and formerly of Northville died peacefully in his sleep on Thursday, October 22, 2020. He was born on December 10, 1936 in Washington, D.C., the son of John and Irene Bacigalupi. He grew up near Cleveland, OH where he attended St. Ignatius High School. He received his Bachelor of Science in Mechanical Engineering from the University of Detroit and his Master of Science and Engineering from Case Western Reserve. He served six years in the U.S. Air Force achieving rank of Captain. While in the Air Force, he served at the National Aeronautics and Space Administration (NASA) Lewis Research Center (now the John H. Glenn Research Center) where he received the Apollo Achievement Award for his contributions to the Apollo space missions. In the early 1970's he went to work at Ford Motor Company. He retired there after nearly 30 years where he served as Program Manager for the Ford Expedition, Navigator and Excursion. He loved the water and, in his retirement, enjoyed spending afternoons boating around Grand Traverse Bay with family and friends as well as almost annual cruises to Alaska and the Caribbean. He enjoyed long drives in the fall colors and spent countless winter afternoons at the beaches in Florida. Most importantly, he was a good and honest man; an unwaveringly dedicated father and grandfather; a devote and loving husband; and a faithful man of Christ. He is survived by his wife of nearly 59 years, Lois Bacigalupi of Williamsburg; sister June Kaspar; daughters Lisa (Mike) Krekeler of Plano, TX and Linda Bacigalupi of Columbus, OH; sons Rob (Leslie) of Traverse City and Jeff (Jill) of Petoskey; eight grandchildren Eric, Ryan, Collin, Remy, Gabriella, Sofia, Henry and Andy; as well as numerous nieces and nephews. He will be sorely missed. A memorial mass will be held on Friday, October 30, 2020 at 11:00 am at Christ the King Catholic Church in Acme. Interment will follow at the Acme Township Cemetery. In lieu of flowers, memorial contributions may be directed to St. Ignatius High School. Please visit www.rjfh.tv to view the memorial mass. The family is being cared for by Reynolds Jonkhoff.

Robert John Bacigalupi, 83, of Williamsburg and Delray Beach, FL and formerly of Northville died peacefully in his sleep on Thursday, October 22, 2020. He was born on December 10, 1936 in Washington, D.C., the son of John and Irene Bacigalupi.... View Obituary & Service Information

The family of Robert John Bacigalupi created this Life Tributes page to make it easy to share your memories.