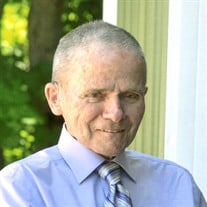 Robert ‘Bob’ Blonshine, 81, of Maple City, left us all on December 3, 2019 to dance with his wife once again. Bob was born January 9, 1938 to the late Russell and Frances (Harrigan) Blonshine in Traverse City. He was one of 13 children. On March 24, 1967, Bob married his soulmate and life-long camping companion, the late Charlotte Blonshine (Grubb). Bob proudly served his country with the United States Army. After serving, Bob dedicated his career in the manufacturing industry mostly in automotive and iron works (think about Bob the next time you see a fire hydrant and manhole cover while you walk around Traverse City). He had many passions in life; hunting, fishing, watching wrestling, woodworking, camping with his family, swinging his bride around the dance floor, polishing his Model A’s and being the ever present, husband, father, grandfather, friend and mentor. He was the true definition of a family man and was loved deeply not only by his family but by his friends and neighbors. Bob is survived and missed dearly by his daughter Donna (Tom) King and his son Robert (Cherry) Blonshine Jr, his grandsons; Thomas (Katie), Michael and Aaron (Bethanie) King, as well as great granddaughter Everly. He is also survived by two siblings Michael and Denny. Also surviving are many nieces and nephews. He is preceded in death by his wife, his parents, his infant daughter Laura Lee and his siblings; Shirley, Richard, James, Thomas, Mary Lou, Harold, Howard, Fred and Daniel. A Funeral Mass will take place Friday December 6, 2019 at 11:00am at the Reynolds Jonkhoff Funeral Home with visitation one-hour prior. Deacon Rene Hoenscheid will officiate. Bob’s final resting place will be at Grand Traverse Memorial Gardens. Please visit www.reynolds-jonkhoff.com to share your memories with the family on Bob’s tribute page. The family is being cared for by the Reynolds Jonkhoff Funeral Home and Cremation Services.

The family of Robert Blonshine created this Life Tributes page to make it easy to share your memories.