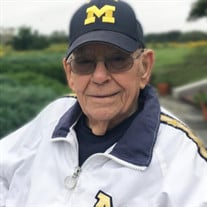 Robert (Bob) Edward Bauer, 95, passed away January 23 2021. Bob was born to parents, Russell and Goldie (Freeland) Bauer on September 5, 1925 in Traverse City. He was a 1944 Graduate of Traverse City High School; after high school he wanted to join the military to support the war effort but a heart murmur prevented him from serving. Bob and a couple of his buddies drove across country to Seattle where they worked in the Naval Shipyards at Puget Sound. He liked to talk about getting the USS Missouri ready for a special mission in the Pacific theater. Upon returning to Traverse City Bob and Bertha (Joyce) Marie Broadway were married in March of 1946. Bob worked for Wolverine Express and Joyce worked at Gambles. In 1966 they moved on Elk Lake by Williamsburg; MI. Bob was a caddy in his youth at the Traverse City Country Club which led to his lifelong passion for golf. He was also a good ice skater and played defenseman for the Traverse City Penguins Hockey Team. The highlight of his career was playing in a championship game in the early 1950's at Olympia stadium in Detroit. When his kids were growing up, he became the Cubmaster of the local Cub Scout pack and eventually served on the board of directors for the local Boy Scouts. In 1964 a new passion developed, one that would last over 50 years. Bob and Joyce would become season ticket holders at Michigan Stadium following the mighty Wolverines. Nobody has logged more miles driving to Michigan Football games than Bob and Joyce and later with his granddaughter Michelle. An estimated 200,000 miles driving back and forth to Ann Arbor on football Saturdays, visiting every Big Ten football stadium and attending bowl games in California, Arizona, Florida and Hawaii. When Bob wasn’t rooting for the Maize & Blue, he was working in his woodshop; doing projects around the house; making things for his sons, grandchildren and neighbors became a full-time job. Of course, that includes the stint where he shared his talents with the Schultz, Snyder and Steel Lumber Company in Bates, Michigan. When Joyce was in Birchwood, an assisted living facility in Traverse City, he visited her every day and became the Volunteer of Year for several years building outdoor furniture and indoor cabinets. Bob loved his family and neighbors and held a special place in his heart for the people who knew him as "Uncle Bob". Bob would return to Birchwood (now MediLodge) in 2020 where he would spend his final days. Bob is preceded in death by his wife Joyce, his son Mark; his big sister, Catherine Krekel, brother Russell Bauer, Jr., brothers Jack and Richard and sister Bonnie Belle Stevens. He leaves to cherish his memory sister Barbara Waldeck; sons Robert Edward Jr, Roger Roy (Carol), and Randy Michael; grandchildren Michelle Anderson (Joe), Iris Marie Proctor (Joe Mehailescu), Yohanna Stringer (Ron) and Cory Leigh Dunham (Stephanie); great grandchildren Summer Marie Anderson, Autumn and Sebastian Dunham, Christian Stringer, Jayden Charles Dunham, Brandt Edward Dunham, Maiah Dunham and Gabrielle Stringer; and friends Wilma Jean and Ashley Purcell. A private family memorial service has been held; it may be viewed on the Reynolds-Jonkhoff Funeral Home's site. The family suggests any donations be made to The Father Fred Foundation in the name of Bob Bauer. Please feel free to share your thoughts and memories with Bob’s family at his tribute page at www.reynolds-jonkhoff.com. The family is being cared for by the Reynolds-Jonkhoff Funeral Home and Cremation Services.

Robert (Bob) Edward Bauer, 95, passed away January 23 2021. Bob was born to parents, Russell and Goldie (Freeland) Bauer on September 5, 1925 in Traverse City. He was a 1944 Graduate of Traverse City High School; after high school he wanted... View Obituary & Service Information

The family of Robert "Bob" E. Bauer created this Life Tributes page to make it easy to share your memories.