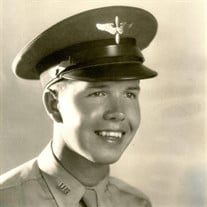 Robert “Bob” Chipman, 95, of Traverse City passed away on Monday, June 17th at Bay Ridge Assisted Living with his family at his side. Bob was born on January 18, 1924 in Boyne City to the late Arthur and Martha (Saffran) Chipman. The Chipman family was involved in lumbering, construction and marine businesses around Lake Charlevoix. At a young age, Bob developed the skills in carpentry, electrical, plumbing and landscaping that would in later years enhance his homes, as well as the homes of his children. After graduating from high school, Bob attended Michigan State College (to become MSU). In his sophomore year, he left to join the U.S. Army Air Corps where he served as an aviator specializing in navigation during World War II. It was while he was home on leave, out with family and friends, when he met the love of his life, Patricia VanderArk. Upon his discharge from service Bob returned home to Boyne City to work in the family businesses, when fate stepped in, and he and “Pat” met again. They were married one year later on August 16, 1947 at the Atwood Reformed Church in Ellsworth, Michigan. Within the next four years, they added a daughter and a son to their family and moved to Flint, where Bob had accepted a position with the Chevrolet Division of General Motors. Bob never lost his love for northern Michigan, and the family vacationed every year on the shores of Lake Charlevoix boating, water skiing, swimming and fishing. Pat’s unexpected and early passing had Bob take an early retirement and move to Traverse City to be back home in northern Michigan and be closer to family. It was here that he purchased his first sailboat, became involved with biking often from Traverse City to Leelanau County, and took up tennis and more time for golf. His passion for basketball was answered by traveling for over 30 years to Topeka, Kansas to watch his son coach the Washburn University basketball team. In retirement he journeyed to many places both domestically and internationally, but traveling to Topeka for Washburn basketball was always number one. Above all else, Bob cherished his family. He was so proud of all of their accomplishments and relished being able to spend time with and support them. Their happiness and success is a direct result of his love and guidance. Bob was preceded in death by his parents, his wife Pat, brothers Russell and Roman, and his sister Monesa. Bob was also preceded in death by his beloved Westie, Oliver, and by Joyce Finch who he spent many happy years with at their homes in Michigan and Green Valley, Arizona. Bob’s memory and legacy will live on in his daughter Susan (Keith) Carlyon of Traverse City; son Robert (Carol) Chipman of Topeka, KS; grandchildren Robert (Tami) Jamieson of Wayne, PA, Karyn (Jim) Stoops of Traverse City; Kelsey (Nick) Stringer) of Wamego, KS; Bobby Chipman (Caysie Beetley) of Los Angeles, CA; great grandchildren Caden Stoops, Cameron Stoops, Axel Jamieson, Wyatt Stringer and Everett Stringer; and his brother Jerry Chipman of Charlevoix, MI and Orlando FL. Internment will take place at Oakwood Cemetery. A family celebration of his life will be held at a later date. In lieu of flowers, memorial contributions may be directed to the Cherryland Humane Society or to the Hospice of Michigan. The family is served by Reynolds-Jonkhoff Funeral Home.

Robert &#8220;Bob&#8221; Chipman, 95, of Traverse City passed away on Monday, June 17th at Bay Ridge Assisted Living with his family at his side. Bob was born on January 18, 1924 in Boyne City to the late Arthur and Martha (Saffran) Chipman.... View Obituary & Service Information

The family of Robert "Bob" Chipman created this Life Tributes page to make it easy to share your memories.

Robert “Bob” Chipman, 95, of Traverse City passed away on Monday,...