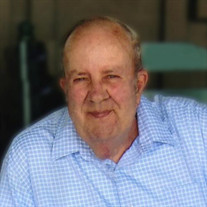 Traverse City - Robert Ernest Cox, 72, of Traverse City, died Wednesday, March 02, 2016 with his wife Darlene and daughter Angela by his side. Robert was born on November 18, 1943 to the late Clayton and Lorraine Cox. At 17, Bob joined the army and completed 2 tours in Vietnam. After 9 years he was honorably discharged as a Staff Sargent. He was also a proud member of the VFW and served as a Senior Vice commander. Bob then dedicatedly worked in the oilfield for over 30 years. Robert married the love of his life, former Darlene Portice, on July 18,1964. Together they raised three lovely daughters; Angela, Kimberly and Colleen. Bob was a kind and gentle man, always placing his wife and family as his priority. To Bob, family was the most important gift, never missing the opportunity for a family function or cup of coffee with a friend. Some of his other interests were fishing, reminiscing about "the old days" and enjoying nature. His grandchildren and great grandchildren were the twinkle in his eye and light of his heart. Robert is survived by his wife Darlene and his three daughters; Angela (Carl) Baker, Kimberly (Jack) Challender and Colleen (Robert) Orr. Grandchildren; Brent (Katherine) Baker, Kori, (Jeff Needham) Baker and Alex (Chelsea Axtell) Challender. Great grandchildren; Bailee, Cameron, Madison, Alexis, William, Erica, Nicholas, Riley, Zoey, Elizabeth, Tyler, Fyn and Jacob. Bob is also survived by his brother Thomas (Mona) Cox and Pamela (Daniel) Poncinie and many other loving family members and friends. Robert was preceded in death by both his parents as well as his brother Clayton, sister Patricia and his brother John. Visitation for friends and family will be held on Friday March 11, 2016 from 5pm to 7pm at the Reynolds-Jonkhoff Funeral Home. Funeral services will take place at Central United Methodist Church at 2pm on Saturday March 12, 2016. Burial will take place immediately following the service at Grand Traverse Memorial Gardens with full Military Honors. Those planning an expression of sympathy may wish to consider donations to the Vietnam Veterans of America in Robert's name, Chapter 20- P.O. Box 12580 Rochester, NY 14612.

Traverse City - Robert Ernest Cox, 72, of Traverse City, died Wednesday, March 02, 2016 with his wife Darlene and daughter Angela by his side. Robert was born on November 18, 1943 to the late Clayton and Lorraine Cox. At 17, Bob joined the army... View Obituary & Service Information

The family of Robert (Bob) Ernest Cox created this Life Tributes page to make it easy to share your memories.