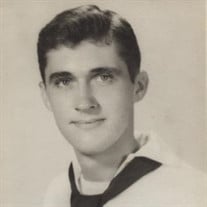 Robert “Bob” Leland Jones, 95, of Traverse City passed away peacefully on Friday, May 24, 2019 at Culver Meadows Senior Living. Bob was born on Feb. 20, 1924 in Rushford, NY to the late Clyde and Jessie (Phillips) Jones. He married the love of his life, Harriet Boland on May 25, 1946 in Kenmore, NY. She predeceased him on April 10, 2001. Bob proudly served his country in the U.S. Navy as an Aviation Radioman during World War II. He served in the Aleutian Islands and was proud of the fact that he sailed around Cape Horn, where the Atlantic and Pacific Oceans meet. Bob moved to Traverse City from Ithaca, Michigan in 1969. While in Ithaca he owned and operated Ithaca Lumber Company. He was also a past President of the Ithaca Lions Club. He was a member of the Traverse City Home Builders Association. He retired from Wicks Lumber in 1986. Bob was an avid golfer and loved fishing. In 1997 he aced a hole in one at Elmwood Golf Course which was a story he enjoyed telling. As recently as two years ago he was invited to fly the Honor Flight to Washington D.C. Bob is survived by his three loving daughters; Debra (Dan Brewer, Jr.) Jones, Sharon Jones and Susan Jones. Also surviving are three grandchildren; Robert (Kim) Joest, Gerald (Kacey Wingate) Joest, and Jennifer (Dennis Sullivan) Hall, as well as five great-grandchildren; Kylie, Philip, Calli, Natalia, and Elizabeth, his nieces Sandi and Carol, and dog Luna. He was preceded in death by a sister, Letha Lowrey. In accordance with Bob’s wishes, cremation has taken place and a private family service will be held at a later date. In lieu of flowers, those planning an expression of sympathy may consider a memorial donation to Heartland Hospice. Please feel free to share your thoughts and memories with Bob’s family on his tribute page at www.reynolds-jonkhoff.com. The family is being cared for by the Reynolds-Jonkhoff Funeral Home and Cremation Services.

The family of Robert "Bob" Leland Jones created this Life Tributes page to make it easy to share your memories.