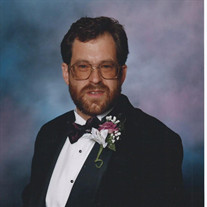 Died April 27, 2015 WILLIAMSBURG — Robert “Bob” Dennis Send, 54, of Williamsburg, passed away April 27, 2015 at home surrounded by his loving family. He was born on Sept. 8, 1960 to Richard and Rose (Plamondon) Send. He graduated with honors from Elk Rapids High School in 1979. He obtained his associate’s degree from Northwestern Michigan College in automotive technology. He later obtained 16 certifications and became an ASE Master Mechanic in automotive and heavy trucks. Growing up on the Send Brothers family farm he learned at a young age the importance of hard work and developed a strong sense of responsibility, as well as being resourceful. Bob spent 20 years enjoying his customers as he worked on their equipment at Ginop Sales in Williamsburg as a mechanic. Bob then moved on to become a dedicated mechanic for the City of Traverse City for 10 years prior to becoming ill. He enjoyed working on a variety of equipment including police cars, fire trucks, snowplows, beach cleaners and mowers, with his favorite being “the Holder,” also known as the sidewalk plow. Bob was known for making service calls after church to maintain and repair equipment for others. Bob and his brother, Steve, were the neighborhood mechanics and spent many hours working together in the pole building in their spare time. The rewards of turning wrenches and restoring antique John Deere tractors were enjoyed as a family tradition on many different parade routes as members of the Great Lakes Antique Tractor Club. He enjoyed interacting with spectators as he drove his tractors each year in the parades - National Cherry Festival in Traverse City, Harbor Days in Elk Rapids and the Greatest 4th in the North in Lake City, as well as many other smaller parades. He had the pleasure of crossing the Mackinaw Bridge four times during the annual bridge crossing for the parade of tractors. Bob also coordinated having a variety of tractors and plows ready for the annual plow days at the Send farm. He enjoyed giving hay wagon rides for the guests of the Acme Fall Festival each year. Bob was a member of the Knights of Columbus and lifelong member of the Catholic church. He will be remembered for his kind heart, gentle nature, strong faith, and as hardworking and never complaining. He enjoyed listening to the stories of others and always enjoyed a good laugh. He will be missed by all who were blessed to have know him. Bob is survived by his parents, Richard and Rose Send; his sister, Victoria (Thomas) Emerson and their daughter, Ericka; brother, Stephen (Betty Korson) Send and their family, Stephanie, Isaiah, Zachary and Jonathan, all of Williamsburg; and brother, Douglas (Jenny Seipp) Send and their children, Joseph, Marissa, Gianna, Maria, Jacinta, Felicity and Miriam, of Dubuque, Iowa. He was preceded in death by his grandparents, Martin and Anna Send, Walter and Elizabeth Plamondon; cousins, Michael Send and Russell Gee; and several aunts and uncles. Bob’s family would like to thank Hospice of Michigan and BrightStar Care for their exceptional compassion and care. Services will be held at Christ the King Church in Williamsburg with visitation Friday, May 1, from 4 to 7 p.m., with scripture service at 5 p.m., and a Mass of Christian Burial will take place on Saturday, May 2, at 11 a.m. His final resting place will be in the Sacred Heart Cemetery in Kewadin at a later date. Memorial contributions may be directed to Hospice of Michigan or Mass Intentions. To share your online condolences and fond memories of Bob please visit www.reynolds-jonkhoff.com.

The family of Robert "Bob" Dennis Send created this Life Tributes page to make it easy to share your memories.