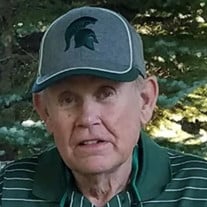 EMPIRE - Robert “Bob” J. Wegener, 81, passed away on Friday, April 19, 2019 at the Grand Traverse Pavilions surrounded by his loving family. Bob was born on July 4, 1937 to John and Bernadine Wegener. Bob was one of 8 children, his siblings: Mary, John, Therese, Bernard, Bill, Jim, and Tom. He was united in marriage to Pauline “Polly” Elbode on August 9, 1958. They celebrated over 60 years of marriage and their four children. Bob is forever loved by his wife Polly; children: Robert Jr. (Margie) Wegener, parents of Austin and Natalie, Charles (Maureen) Wegener, parents of Anna and Evan, David (Cheryl) Wegener, parents of Ellen, Reagan, and Lauren, and Nancy (Brent) Sherman, parents of Ben and Jane; great-grandchildren Elizabeth and Cora. Those wishing to make a donation in Bob’s name may do so to the Alzheimer's Association - Greater Michigan Chapter, 25200 Telegraph Rd., Suite 100, Southfield, MI 48033. A memorial service is to be held at a later date. Bob and his family are in the care of Reynolds-Jonkhoff Funeral Home & Cremation Services.

The family of Robert "Bob" J. Wegener created this Life Tributes page to make it easy to share your memories.