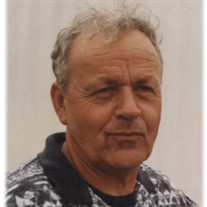 Traverse City - Robert "Bob" Whaley, 78, of Traverse City passed away September 7, 2014 at his home with his loving wife by his side. Bob was born on September 11, 1935, along with his twin brother Richard in Hudson to the late Harold Odell and Rose Elizabeth (Bisher) Whaley. Bob graduated from Traverse City High School in 1953. He was a project manager for commercial construction and built countless buildings around Traverse City ranging from medical office buildings to churches and many more. His impact is immeasurable. Bob spent the last 20 years with Peninsula Construction and Design. In addition to Traverse, his reach extends all the way to Marquette to Grand Rapids to Manistee and Grayling. He was dedicated to his work and enjoyed helping people. He also helped complete several Habitat for Humanity homes. In his spare time he enjoyed spending time on Silver Lake. In 1966 he bought the Twin Oaks Resort and cherished every moment he spent on the water. It was his haven. Bob was one of the most generous and caring individuals that would help anyone and everyone. Faith was extremely important to Bob. It was his Salvation. Before every meal he would say grace and would thank the Lord for his family and all of the blessings bestowed upon him. Bob was a member of the Traverse City Masonic Lodge and was a Master and past Master. In May of 1999, Bob married his buddy, his best friend, and his soul mate, Nancy. Bob is survived by his wife Nancy, his children Wanda, Tony, Bill, Stacie, Larry, Martha, 15 grandchildren, twin brother Richard "Dick" (Lois) Whaley, sister Helen (Ralph) Altwies, nine loving and supporting nieces and nephews, and three daughters that he loved and treasured from a distance, Deborah, Wendy, Cynthia and their 10 children. Bob was preceded in death by his parents and sister Elizabeth "Betty" Whaley. The memorial service celebrating Bob's life will take place on Thursday, September 11, 2014 at 1:00 pm with visitation beginning at Noon at the Reynolds Jonkhoff Funeral Home. Memorial contributions in lieu of flowers may be directed to Habitat for Humanity, the American Cancer Society, or Munson Hospice.

Traverse City - Robert "Bob" Whaley, 78, of Traverse City passed away September 7, 2014 at his home with his loving wife by his side. Bob was born on September 11, 1935, along with his twin brother Richard in Hudson to the late Harold Odell... View Obituary & Service Information

The family of Robert "Bob" Grant Whaley created this Life Tributes page to make it easy to share your memories.