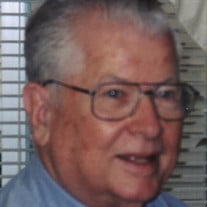 TRAVERSE CITY - Robert “Bud” Watson passed away September 14, 2020 at Grand Traverse Pavilions. Bud was born October 25, 1928 to the late Kenneth and Nellie (Monroe) Watson. After graduation from Highland Park High School, he joined the U.S. Navy in 1948. Bud married Janet (Coleman) Watson on Saturday, July 22, 1950 in Traverse City, MI. They raised three children. Bud is survived by those children; Bobbie (Greg) Simon of Traverse City and their two children Phil (Amy) Simon, Kelli Werner, Rick (Pat) Watson of Traverse City; and their three children Chris (Sara) Watson, Mark Watson, Heidi (Chris) Dobias, Don (Jan) Watson of Cadillac; and his two daughters Erica (Bernie) Cordell, Leslie (Wil) Antoine, and sixteen great-grandchildren, one great-great-grandson and many nieces, nephews and loving friends. Other surviving family members include two half sisters, Barbara Salisbury and Charlene Adams. He was preceded in death by his beloved wife, Janet and an infant son, Jeffery. Bud learned the electrical trade in the Navy, worked in construction in Traverse City and ultimately served for many years as Mechanical Maintenance Supervisor at the (then) Traverse City State Hospital until his retirement. He and Janet were active members of the Asbury Methodist Church assisting in the construction of the current church building on Ramsdell Road and conducting monthly fundraising dinners for many years. Bud was active with the Boy Scouts of America, serving as Scoutmaster, Senior Patrol leader for Senior Scouts, and Scouting Commissioner for the Scenic Trails Council. He was the recipient of many Scouting awards including the prestigious Silver Beaver Award for distinguished service and making an impact on the lives of youth through service to the Council. After retirement Bud remained active as electrical Inspector for Leelanau County and courtesy driver for Fox Motors. He enjoyed spending his retirement with his friends, children and grandchildren until his health curtailed his activities. He spent the last 4 years of life at the Grand Traverse Pavilions. Visitation will be on Monday, September 21 beginning at 9:00 AM and the funeral service for Bud will be at 11:00 am at the Reynolds-Jonkhoff Funeral Home. Graveside committal services will be held at Grand Traverse Memorial Gardens following the funeral service. In lieu of flowers, memorials may be directed to the Grand Traverse Pavilions, 1000 Pavillions Circle, Traverse City, MI 49684. The Watson family would like to thank the staff at Grand Traverse Pavilions for their care and compassion during our father’s stay.

The family of Robert "Bud" C. Watson created this Life Tributes page to make it easy to share your memories.