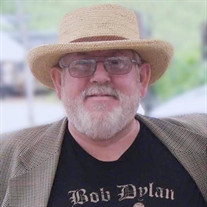 Pastor Robert Eugene Collier, 72, of Traverse City, stepped, danced, and leapt joyfully into the presence of his Lord and Savior, Saturday, July 4, 2020, without the aid of the cane that was his constant companion for many years. Known to many as Pastor Bubba (because anyone that large with a southern accent had to be named Bubba), Robert was known for many things: His humor, his kindness, and his deep love for God and other people. He was a pastor to everyone, whether they attended his church or not; a friend, advocate, and counselor to many, an educator, encourager, and healer. He was an astute assessor of human nature, a talented translator of Hebrew and Greek, and one of the sharpest theological minds of our time. Robert was born on Thursday, August 28, 1947 in Pascagoula, MS and was raised by his parents Neuman Eugene and Lucille Augusta (Wooten) Collier in West Memphis, Arkansas. He graduated from West Memphis High School and went on to become the first person in his family to attend college. After partying through the first couple of semesters, Robert paused to marry the love of his life, Roxanne Durham, on June 18, 1966 and start a family. They moved from West Memphis to Horn Lake, MS, where he was called to the ministry in 1974. Robert went back to college, earning his bachelor’s degree from Arkansas State University and then his Master of Divinity (magna cum laude) from Mid-America Baptist Theological Seminary, all the while pastoring small churches and raising his family in faith and integrity. He taught his children to be strong, independent thinkers, and encouraged them to be true to themselves and confident in their abilities. Robert and Roxanne were the dream team of all marriages, each supporting and respecting each other. They moved around, pastoring churches that needed love and healing, and ultimately landed in Northern Michigan, where they started Grand Traverse Community Church and became involved in the Northern Michigan DeColores community. They celebrated 48 years of marriage before Roxanne transitioned to her heavenly home on December 23, 2014. When Robert wasn’t preaching, teaching, or counseling, his favorite pastime was listening to Bob Dylan, reading, and studying deep biblical truths. He also occasionally enjoyed exploring his southern roots or Scottish ancestry via a glass of bourbon or scotch. He relished sharing stories of his involvement in the Civil Rights movement, and of “his kids” in the migrant community, who grew up to make him proud. If you caught him on a good day, he would share hilarious stories of his adventures transitioning from a city boy to country living and the resulting escapades. Robert was an incomparable husband, father, grandfather, great grandfather and friend. He was preceded in death by his parents, his wife and his granddaughter, Adrian Elyse Morris. He is survived by his daughter, Penelope Lane (Loyd) Morris of Traverse City; his son, Christian Reed (Lan) Collier of Tallahassee, FL; grandson William Kent (Dakota) Morris of Jennings, granddaughters, Celeste Morris of Traverse City, Lakyn Collier of Oxford, Mississippi and Jessica Collier of Tallahassee, FL. Also surviving are his great grandchildren Sealley, Clyde, Aurora and Angel. A time to celebrate Pastor Bubba's life will begin at 1 p.m. Saturday July 25 at First Christian Church, 3686 W. South Airport Road, Traverse City. Interment will be in Linwood Cemetery in Long Lake Township at a later date. The family had asked that memorial contributions by directed to Northern Michigan DeColores Ministries, c/o Reynolds-Jonkhoff Funeral Home, 305 Sixth St., Traverse City, MI 49684.

Pastor Robert Eugene Collier, 72, of Traverse City, stepped, danced, and leapt joyfully into the presence of his Lord and Savior, Saturday, July 4, 2020, without the aid of the cane that was his constant companion for many years. Known to... View Obituary & Service Information

The family of Pastor Robert E. Collier created this Life Tributes page to make it easy to share your memories.