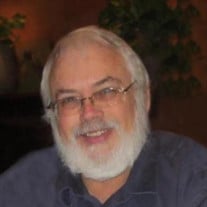 Robert “Doug” Haines, 72, of Traverse City, passed away November 28, 2021. He was born January 14, 1949 in Saline, MI, son to Robert and Carol (Stevens) Haines. Doug lived in the area since the age of four. He graduated from Buckley Community School. He honorably served in the United States Army Reserves. He worked for 14 years at the Traverse City State Hospital. After dairy farming for a few years, he earned his Bachelor's degree in teaching, from Ferris State University. He was a dedicated member and past master of several local Masonic lodges. He spent over 30 years coaching youth and high school basketball, baseball and softball. Doug enjoyed hunting, woodworking, golf, and above all, the most important thing to him was family. His favorite times were ones spent with his children and grandchildren; camping, gardening, and spending time outside. Doug brought so much laughter and happiness to those around him, his passing leaves a huge hole in the hearts of his family and friends. He will be deeply missed by his beloved family. Doug leaves behind his wife Louise (Woods); daughters Kimberly (James) Norvell and Heather (Robert) Tyler; grandchildren Christina Piegols, Robert Riley, Samantha (Juan) Olivares, Mackenzie (William) LaParr and Kierstyn; great-grandchildren Gracin, Ezekiel and Ryleigh; brothers Steven (Carolyn) Haines and Donald (Cheri) Haines; sister Joann Rikli and other extended family members and friends. He was preceded in death by his parents and brother David Haines. A Masonic memorial for Doug will be held Sunday, December 12, 2:00 pm, at the Benzie Masonic Lodge, 9513 Covey Road, Beulah, MI 49617. A luncheon will follow. In lieu of flowers, memorial contributions may be directed to the Michigan Masonic Charitable Foundation, 1200 Wright Ave., Alma, MI 48801 Memories and condolences may be shared on Doug’s tribute page, www.reynolds-jonkhoff.com

The family of Robert "Doug" Haines created this Life Tributes page to make it easy to share your memories.