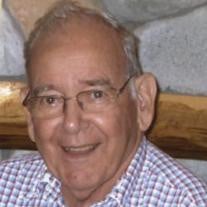 Robert D. Goodrich, 82, of Traverse City and formerly of Allegan, MI died and was welcomed into his Heavenly Home Friday, August 24, 2012 at Grand Traverse Pavilions in Traverse City. Robert was born on March 30, 1930 to the late Paul and Shirley (Remington) Goodrich in Kalamazoo, MI. He entered into marriage with his high school sweetheart, the former Irene D. Wedge, on November 12, 1949 at the Allegan Bible Church. With his love for automobiles, friendly nature, and out going personality, Bob excelled at selling cars for a local dealer. For a time, he ventured into a business of his own selling used cars. Later in life, he was a camp manager for Christian Youth Training Camp on Gull Lake in Richland, MI and eventually retired from the Allegan Intermediate School District as a school bus driver. After his retirement in 1996, he and his wife moved to Traverse City. His greatest joy was his marriage of 62 years to his faithful companion and friend, Irene, his three wonderful children, and his relationship with the Lord Jesus Christ. Bob loved the game of baseball and was an avid Tigers fan since his youth. He loved the outdoors and spent many years hunting, fishing, and camping with his children and grandchildren. Robert is survived by his wife, Irene D. Goodrich, of Traverse City, their three children, Bob (Sharon) Goodrich of Grand Rapids, Dennis (Deb) Goodrich of Kalamazoo, and Debra (Kelly) Miller of Traverse City, 8 grandchildren, and 16 great grandchildren, his brothers, Paul Goodrich, Ken Kaminga, and Don Kaminga. He was preceded in death by his parents and sister, Dolly Goodrich, and brothers, Lew Kaminga, Norman Kaminga, and Phil Goodrich. Visitation for friends and family will be held from 6:00 p.m. until 8:00 p.m. on Monday, August 27, 2012 at Bible Baptist Church, located on the corner of Cass and Hartman Road in Traverse City. Funeral Services will take place at 11:00 a.m. on Tuesday, August 28, 2012 also at Bible Baptist Church, with visitation one hour prior. Pastor Joel Brown will officiate. In lieu of flowers, memorial contributions may be directed to Bible Baptist Church, Allegan Bible Church, or Grand Traverse Pavilions Elm Unit to aid in Dementia Care.

Robert D. Goodrich, 82, of Traverse City and formerly of Allegan, MI died and was welcomed into his Heavenly Home Friday, August 24, 2012 at Grand Traverse Pavilions in Traverse City. Robert was born on March 30, 1930 to the late Paul and Shirley... View Obituary & Service Information

The family of Robert D. Goodrich created this Life Tributes page to make it easy to share your memories.

Robert D. Goodrich, 82, of Traverse City and formerly of Allegan,...