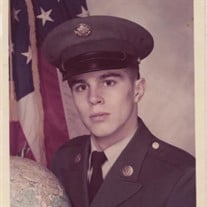 Robert William Herzberg Jr., 65 of Traverse City went to be with his Lord Jesus Christ on April 11, 2020 following liver failure and pneumonia complications. His family was by his side. Robert was born on July 16, 1954 in Saginaw to Robert William and Helen Marie (Deming) Herzberg Sr. He was baptized at Trinity Lutheran Church. He graduated from Douglas MacArthur High School class of 1972. Robert and his family skied night and day at Bintz Apple Mountain. Robert’s mother always made sure homework was completed before they could go skiing. They loved skiing together as a family and he and his siblings were never just dropped off. Robert and his family also enjoyed family trips. Some special trips included Disneyland and the Grand Canyon in 1959 and the World Fair in 1962 in Washington. He enlisted on December 5, 1973 in the United States Army. He served in the 583rd Ordinance and was a specialist technician. He received the National Defense Service Medal-Marksman M16. He taught fifty British Officers to ski the German Alps. He was honorably discharged on November 17, 1975. He was proud to have served his country. He worked in the family business Delta Duplicating/Copy Sales and Service and moved to Traverse City. He enjoyed fishing for Blue Gills in Spider Lake. He was a member of the D.A.V., N.R.A, and American Military League from the very beginning in 1981. He leaves his mother Helen Marie Herzberg of Traverse City; sister Dr. Kathleen M. (Greg) Skelcey of Saginaw and sister Karen Marie Yowell of Traverse City. Robert was preceded in death by his brother Michael C. in 1979 and by his father in 2016. He loved and adored his nieces and nephews Kris Wilcox and Alijah Helmar of Key West, Dana Lynn and Madilyn Rose Peeples of Madisonville, LA, Caitlin Skelcey of Buffalo, NY, Eliza Rose Mary and Alexsandr Skelcey of Wyoming, MI; aunts Martha Shores of Mt. Morris, MI, Dorothy Rettmann and Sandra Richmond of Saginaw; the children of the late grandmother Frieda (Bleck originally of Auburn) Herzberg of Saginaw who had a big family of fourteen children. He enjoyed family reunions and fun times. Many many cousins of Glenn and Martha Shores, Joe and Thelma Herzberg, Tom and Liz Ratti; Thorris Grief, Joe and Penny LaDrigue, Robin Shafely, Jeffrey Marr, Russ Shafely, Jonathan Stevens, Dorothy Rettmann and daughters, Sandra Richmond, Otto and Arlene Berner of Auburn, late grandparents Russell and Mickey (Crossland) Bennett family and cousin Sally Keith Polmanteer. The calls at home and hospital from Rob’s loving family and friends were greatly appreciated. The family thanks Munson Medical Center for his care. Thanks also to Shannon and the staff at Medilodge at 2950 La Franier Road for your care of Rob and compassion and kindness to Rob’s mother Helen Marie and sisters Kathleen (Greg) and Karen Marie. Thank you to Reynolds Jonkhoff Funeral Home for the care they have shown. Cremation has taken place per Rob’s wishes. Expression of sympathy may go to a charity of your choice. Please visit www.reynolds-jonkhoff.com to share your memories with Rob’s family.

Robert William Herzberg Jr., 65 of Traverse City went to be with his Lord Jesus Christ on April 11, 2020 following liver failure and pneumonia complications. His family was by his side. Robert was born on July 16, 1954 in Saginaw to Robert... View Obituary & Service Information

The family of Robert William Herzberg Jr. created this Life Tributes page to make it easy to share your memories.

Robert William Herzberg Jr., 65 of Traverse City went to be with...