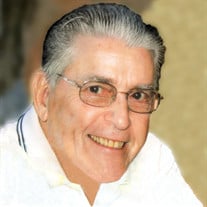 Robert Francis Jude Kauffman, 89, of Traverse City passed away July 29, 2018 at his home with his family by his side. Bob was born on January 11, 1929 in Detroit to the late James Delmer and Evelyn (Everson) Kauffman. Bob served our country honorably as a member of the United States Naval Reserve during the Korean Conflict. On November 21, 1953, Bob married Ruth Ann Hancock at Christ the King in Detroit. As a young man, Bob moved in across the street from Ruth, and after some time and getting to know each other, the two dated and started their love story. Bob earned his Masters in Fine Art from Wayne State University. He was an art teacher for many years and taught at Franklin High school in Livonia. Even when he wasn't teaching, he loved art and was very talented. He could do anything from beautiful sketches to wood carving to even the design and construction of their home on Bass Lake. His family will cherish his gifts of art that he left behind. Following retirement in 1986, Bob and Ruth enjoyed spending the winters in North Hutchinson Island. Bob was a member at St. Francis and later St. Patrick's Catholic Church. Bob also had a passion for music and loved listening to big band music. He taught himself how to play piano, harmonica and the banjo. He would often play renditions of Boogie Woogie on the piano He passed his love of music on to all of his family members. Bob is survived by his beloved wife of 64 years, Ruth; their children Nancy (Dan) Brenneman of Traverse City, Sally Kauffman of Traverse City, Robert (Danielle) Kauffman of Crown Point, IN and Kathleen (Michael) Olson of Geneva, IL; grandchildren Mark, Jonathon, Colleen, Jenifer, Christopher, Alex, Nicholas, Michael, Kristina, Kate and Ethan and great granddaughters Haley, Eden Rose and Adalynn Grace. Bob was preceded in death by his parents, sisters Rose Marie and Marianne and brother James Delmer The memorial mass celebrating Bob's life will be held on Saturday, September 1, 2018 at 11:00 am at St. Patrick Catholic Church with visitation beginning one hour prior. Memorial contributions in memory of Bob may be directed to The Center For Independence through Conductive Education. They are a nonprofit organization that helps people with physical disabilities maximize their independence. www.cfimove.org. 100 W. Plainfield, Countryside, IL 60525. The family is being cared for by Reynolds Jonkhoff Funeral Home and Cremation Services.

Robert Francis Jude Kauffman, 89, of Traverse City passed away July 29, 2018 at his home with his family by his side. Bob was born on January 11, 1929 in Detroit to the late James Delmer and Evelyn (Everson) Kauffman. Bob served our country... View Obituary & Service Information

The family of Robert Francis Jude Kauffman created this Life Tributes page to make it easy to share your memories.