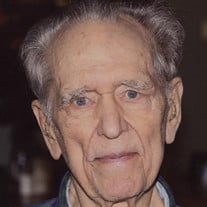 Robert Burton Lautner, 94, of Traverse City, MI died Monday, August 15, 2016 at French Manor Assisted Living in Traverse City, MI Bob was born on Saturday, April 22, 1922 to the late Robert and Harriett (Smith) Lautner in Traverse City. Following graduation from high school, Bob enrolled at MSU to pursue an education in Mechanical Engineering. He interrupted his studies to serve our country in the U. S. Army. Bob served with distinction during WW II in the Pacific Theater, at one point being honored to assist General Eisenhower in awarding medals. He served in the Quarter Master Corps in logistics as aid to a General Officer and was discharged at the rank of Captain. Before being deployed to the Pacific Theatre he was stationed in Laramie Wyoming where he worked alongside Major John A. Silsbee. Through that relationship, he met the Major’s daughter, Gene, and Bob was smitten at first sight. They would later marry and raise three sons. When Bob was discharged from the service, he continued his education at Louisiana State University-Baton Rouge, earning his bachelors degree in Mechanical Engineering. He later became a registered professional engineer, working in chemical manufacturing for Allied Chemical and Exxon Chemical, moving up through the management ranks first in Baton Rouge, LA and then in Syracuse, NY. In his chosen career path Bob had the opportunity to live in Baton Rouge, La., Wheeling, W.Va., and Syracuse, N.Y. In those respective communities he was active in the Rotary Club in public speaking and other organizations which benefited the community. After Bob retired he enjoyed salt water fishing and square dancing in his early years of retirement before moving back to Traverse city. There he enjoyed collecting antiques with his wife Gene, and he especially enjoyed clocks and watches of all kinds and also spent many pleasant hours fishing for walleye with his son Lloyd. Bob is survived by his sons, Gerald M. Lautner of Lillian, Alabama and, Lloyd W. (Terry Harrington) Lautner of Traverse City; a grandson, Scott W. Lautner of Traverse City. Bob was preceded in death by his wife, a son, Robert J. Lautner, his parents, a sister, Betty Scherer, and a younger brother, Hugh. A graveside service will take place at 2 p.m. Friday, Aug. 26, 2016 at Linwood Cemetery, Long Lake Township, Traverse City, MI. For a more lasting memorial, please consider Hospice of Michigan, 10850 E. Traverse Highway #1155, Traverse City, MI 49684 (www.hom.org)

The family of Robert Burton Lautner created this Life Tributes page to make it easy to share your memories.