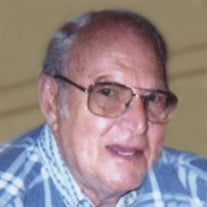 Robert “Bob” Edward Lyon, 89, of Traverse City, Michigan, peacefully went to join his wife of 69 years in Heaven on January 29, 2021. He was born on November 7, 1931, to the late Charles and Bertha (Farr) Lyon at their home on their beloved fruit farm. Bob would eventually become the third generation of Lyons to own and operate Fensmere Farms on the Old Mission Peninsula. He had a great sense of humor and was often joking or teasing. Bob was also an exceptional athlete and excelled in both basketball and baseball. He was so good that he was drafted out of high school by both the Detroit Tigers and the Chicago White Sox. He chose to turn this opportunity down in order to take his place on the family farm and get married. He married his wife, Mary Blackett Shaw, on June 23, 1951. Together they raised their four children and were always involved in their activities. After retirement, Bob and Mary moved to their cottage on Rennie Lake and then in their later years spent their winters in Tavares, Florida. He was an avid hunter and enjoyed training his beagles who won awards in international field trial events for running rabbits. He also enjoyed bowling, golf, and travelling around the countryside, and served on the Board of Directors of the Federal Land Bank for many years. Bob will be greatly missed by his children; Cheryl (Don) Tejchma, Shelley Enger, Robert (Vicki) Lyon, and Billy (Kathy Maldonado) Lyon, his 9 grandchildren, his 13 great-grandchildren and many nieces and nephews. He was preceded in death by his wife, Mary, his parents, his infant daughter Debra, his son-in law Jack Enger, his brother Bruce and sisters Marjorie and Beverly. A service will take place on Thursday, February 4, 2021, at 11:00 a.m. at the Reynolds Jonkhoff Funeral Home with visitation one hour prior. His final resting place will be at Grand Traverse Memorial Gardens. Please visit www.reynolds-jonkhoff.com to share a memory with the family. Those wishing to make a gift in Bob’s memory may make it to the organization of one’s choice. Robert and his family are being cared for by the Reynolds Jonkhoff Funeral Home.

The family of Robert Lyon created this Life Tributes page to make it easy to share your memories.