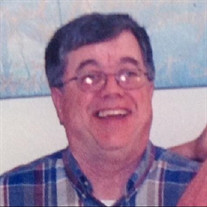 Robert Horace McDowell, Jr. passed away on Sunday, October 18, 2015 after a long, courageous battle with Parkinson's Disease. He was 76 years old. He died at the Grand Traverse Pavilions in Traverse City with his family by his side. Bob was born in Harbor Beach, MI to the late Dr. Robert and Miriam (Littleton) McDowell. The family moved to Saginaw when Bob and his brother, Richard McDowell, were young boys. Bob graduated Arthur Hill High School, attended Bay City Junior College and then went on to earn a degree in marketing from Ferris State University. On June 17, 1967 Bob married Karen Jane Hillman in Saginaw. She survives him. Bob worked for the Saginaw Intermediate School District. Later, he worked for Electronic Data Systems (EDS) at Buick City in Flint and retired from EDS at Saginaw Steering Gear in Saginaw. Bob and Karen moved to Traverse City in November 2012. Bob enjoyed working in his yard and took great pride in keeping the grass cut to his specifications. He enjoyed genealogy, stamp collecting, working on old clocks and assembled many clock kits through the years. He enjoyed grilling for family gatherings. For many years, Bob and Karen had season tickets to Michigan State University football games which they enjoyed with family and friends. Bob especially treasured time spent with his family and the many vacations they took together on the Leelanau Peninsula. Bob is survived by his loving wife, Karen, and his loving children and their families. His daughter, Jennifer Weekly (Jeffery) and their son, Spenser McDowell Weekly reside in Traverse City, MI. His son, Andrew Robert McDowell (Alexis) and their children, Andrew John (Drew) McDowell and Annabelle Karen (Belle) McDowell reside in Littleton, CO. Bob loved sharing big hugs with his grandchildren and they in turn loved their "Papa". He also leaves a brother, Richard McDowell, of San Diego, CA and two brothers-in-law, Michael Hillman of Harper Woods, MI and Richard Hillman (Barbara) and two nephews in Appleton, WI. Bob was a member of First Presbyterian Church in Saginaw. Cremation has taken place and burial will be at Roselawn Memorial Gardens in Saginaw, MI. In lieu of flowers, memorials can be made in Bob's name to Van Andel Research Institute, 333 Bostwick Avenue, N.E., Grand Rapids, MI, 49503 (please designate Parkinson's research), The Grand Traverse Pavilions, 1000 Pavilions Circle, Traverse City, MI 49684 or First Presbyterian Church, 121 South Harrison Street, Saginaw, MI 48602. The family extends their thanks and gratitude to the staff at The Pavilions who gave Bob loving care for over 2 years.

Robert Horace McDowell, Jr. passed away on Sunday, October 18, 2015 after a long, courageous battle with Parkinson's Disease. He was 76 years old. He died at the Grand Traverse Pavilions in Traverse City with his family by his side. Bob was... View Obituary & Service Information

The family of Robert Horace McDowell created this Life Tributes page to make it easy to share your memories.