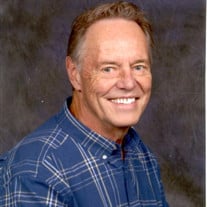 Robert J. Pfeuffer III, 68, of Traverse City, passed away unexpectedly at his home on Tuesday, July 30, 2019. He died peacefully after spending three weeks celebrating the life of his mother with his family. Robert was born in Royal Oak on August 22, 1950 and was raised by his loving parents, Robert and Ellen Pfeuffer. In 1967 his family moved to Kalkaska, MI where he attended high school. Robert participated in multiple high school sports but his true passion was in Track and Field. He loved everything about the sport and earned a scholarship to Central Michigan University as a sprinter on the track team. In 1969 during his summer home from college he enlisted in the Air Force to serve his country during the Vietnam War. He was stationed at Nellis Air Force Base in Las Vegas, NV. While in the Air Force Robert discovered his passion for medicine where he learned to work in the operating room as a surgical tech. After he was honorably discharged in 1975 he was excited to return to Northern Michigan where he continued his operating room career at Munson Medical Center. Robert had a passion for learning and returned to college to obtain his associate degree in nursing at Northwestern Michigan College. He was proud to have worked in the operating room environment for 44 years. Robert was fortunate enough to love his career and was truly passionate about nursing care in the operating room with a special love for orthopedics. Robert “Bob” wore his heart on his sleeve and this was very evident in his love for his three children. He was an amazing father who would do absolutely anything for his kids. It was the small gestures like cleaning their cars, projects around their home, and creating ways to share time with them. He loved his daily talks with his kids on their way home from work where he was always available to offer his love and support. Bob was so proud of his kids, which he continuously expressed to them and those around him. The love for his family was created from the foundation instilled by his late parents, Robert and Ellen Pfeuffer. They were very important to him and had a huge role in the man he became. He was the primary care giver to his mother the last several years of her life. He dedicated much of his time to his mother and making sure she felt happy and loved. She always expressed how much he did for her and how wonderful of a son he was. Bob cherished his time with friends and family. During his retirement he loved playing golf, working in his yard, and any outdoor activities. He enjoyed being around people and had an obvious love for life. This was apparent by his constant and contagious smile. Bob was able to find humor in anything and loved to make others laugh. He had a joke for everything. Bob is survived by his son, Kyle R. (Ashley) Pfeuffer, of Kalamazoo; two daughters, Kelli A. (Matthew) Phelps, of Oconomowoc, Wisconsin, and Allison L. Pfeuffer, of Traverse City; his sisters, Sheryl L. Pfeuffer and Bonnie S. “Cork” (Jerry) Dzuber, all of Las Vegas, Nevada; and four grandchildren, Ella, Claire, and Matthew Phelps Jr. and Scotlyn Pfeuffer. Friends and family are invited to attend a memorial gathering to celebrate Bob’s love for life at Reynolds-Jonkhoff Funeral Home on Monday, August 12th from 5:00pm – 7:00pm. There will be an additional visitation on Tuesday, August 13th at 10:00am with the funeral immediately following at 11:00am. Memorial contributions in Bob’s name may be directed to the Traverse City West Senior High School Track and Field Program in honor of him. C/O Athletics Department: 5376 N. Long Lake Road, Traverse City, MI 49685. Please visit www.reynolds-jonkhoff.com to share your memories and condolences with the family. Bob and his family are being cared for by the Reynolds Jonkhoff Funeral Home and Cremation Services.

Robert J. Pfeuffer III, 68, of Traverse City, passed away unexpectedly at his home on Tuesday, July 30, 2019. He died peacefully after spending three weeks celebrating the life of his mother with his family. Robert was born in Royal Oak on... View Obituary & Service Information

The family of Robert 'Bob' Pfeuffer created this Life Tributes page to make it easy to share your memories.