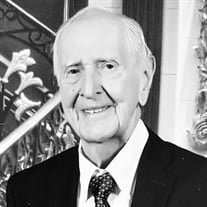 Robert (Bob) Arthur Pierson, 89, of Traverse City, passed away on Thursday, June 4th, 2020 with his wife by his side. He valiantly fought cancer for over 14 years with positivity and great faith. His strength was greatly admired by his family. Bob’s family will always be grateful for the kindness and compassion shown by the staff at Munson Medical Center. Bob, was born in Chicago, Illinois on September 7th, 1930 to Herbert and Carrie (Henrichsen) Pierson. Bob was preceded in death by his parents, his brother Lloyd, his sister Lorayne Kocher, his favorite uncle Art Henrichsen and his previous wife Jean. Prior to having a family, Bob served in the Marine Corp during the Korean War. After the war, he received a PhD in early childhood psychology from Michigan State University. He then moved his family to Macomb, Illinois and became a professor at Western Illinois University. (WIU) He developed many lasting friendships during his 30 years in Macomb. In 1986 he received the award for “Outstanding Teacher of the Year” from the College of Education at WIU. During his time in Macomb he also volunteered for the Special Olympics and was a deacon at the Presbyterian Church. He continued to be a strong supporter of WIU and the Leathernecks after his retirement. And few people could think of Bob without also being reminded of his love for The Bears, (and White Sox), having grown up in Chicago. And, of course, we cannot leave out his beloved MSU Spartans. In 1990 Bob’s dream to retire and live on Long Lake in Traverse City was realized. He had spent many summers there as a child. During his retirement he was a devout member of The Presbyterian Church in Traverse City, had a special place in his heart for supporting Campus Crusade for Christ, was an avid golfer, boater and he shared his love for the lake with many family and friends. Bob met the love of his life, Donna, at WIU and they were married on 12/19/1979. They recently celebrated their 40th anniversary. They felt privileged to be able to spend many winters together in Florida and made many lasting friendships. He is survived by his wife, Donna, and his children Brad (Deanna), Wes, Blake (Laura), Jennifer and Susana (Jeremy). He was also blessed with 8 grandchildren. He will be missed by many, but we take comfort in knowing he lived a long and full life. A celebration of life is being tentatively planned September 2020. A private family ceremony will be held later this summer at Long Lake. Kindly share thoughts and memories with the Pierson family at www.reynolds-jonkhoff.com. Memorial contributions may be made in remembrance to The Presbyterian Church of Traverse City or The Campus Crusade for Christ @ give.cru.org

Robert (Bob) Arthur Pierson, 89, of Traverse City, passed away on Thursday, June 4th, 2020 with his wife by his side. He valiantly fought cancer for over 14 years with positivity and great faith. His strength was greatly admired by his family.... View Obituary & Service Information

The family of Robert A. Pierson created this Life Tributes page to make it easy to share your memories.