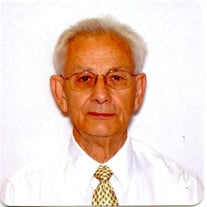 TRAVERSE CITY - Robert Edward Schermerhorn, 84, passed away peacefully surrounded by loving family members and dear friends at his home on Old Mission Peninsula on Wednesday, November 1, 2017. Bob was born on April 8, 1933 to the late Edward and Florence Catherine (Champagne) Schermerhorn in Bay City, Michigan. Bob graduated from Bay City Central High School in 1951 where he was an active participant in extra-curricular activities and sports, being an outstanding athlete in football, track and field. As a senior, he was named Athlete of the Year and was recruited by Don Canham, who was at that time the Track and Field Coach at the University of Michigan and awarded a track scholarship. Following his freshman year and as a potential draftee, Bob enlisted in the United States Air Force. Upon completion of basic training and radio operator school, he was deployed overseas to Sidi Slimane Air Force Base in French Morocco. His next deployment was to a “DEW Line” Air Force radar station located in Finland, Minnesota. While at this posting, he met and married his wife, Flo. Returning to Ann Arbor and U of M in 1956 (Bob remained a loyal Wolverines supporter throughout his life and was member of Delta Sigma Pi fraternity chapter at U of M), he resumed his studies and gave service in the United States Army Reserve, retiring as a Chief Warrant officer with 40 years of duty. Bob had a 30-year career working for the Veterans Administration and the Internal Revenue Service, retiring from the Ann Arbor VA Medical Center as Administrative Assistant to the Chief of Staff in 1988. Upon retirement and moving to Traverse City, he and Flo owned and operated the Historic Victoriana 1898, a bed and breakfast, until 2001. Bob was an active member of the community, serving on several boards and outreach projects. He especially loved to volunteer his time to painting, notably the Music House Museum, Wellington Inn and Goodwill Inn. Bob was a warm and engaging person, liked and loved by those who knew him, a mentor to many young professionals and a gentleman always. He is survived by his beloved wife of 62 years, Flo, and daughter Randi (Randy) Werner, sons Robert (Brandy) and Greg (Tricia), two grandchildren, two great-grandchildren, nieces and cousins. The family wishes to thank the caregivers at Crystal Penny and Hospice of Michigan for their kind and dedicated care of Bob and support to Flo and the family. In lieu of flowers, memorial contributions can be made to Hospice of Michigan, Trinity Lutheran Church, Music House Museum or Peninsula Library. A funeral service will take place at the Trinity Lutheran Church on Monday November 6, 2017 at 2pm with visitation one hour prior beginning at 1:00 pm. A luncheon will be held following the service, also at the church. The family is being cared for by the Reynolds Jonkhoff Funeral Home.

The family of Robert Schermerhorn created this Life Tributes page to make it easy to share your memories.