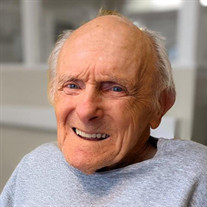 Robert Lee Schneider, 91, of Traverse City, Michigan, passed away peacefully on July 1, 2021 at Cherry Hill Haven. He leaves behind his wife Shirley, two daughters, Laurie and Carol Schneider, Carol’s long-time partner, Joe Cacaci, a Grandson, Sam McCarthy, and many nieces and nephews. Born on November 7th, 1929, in Grosse Pointe, Michigan to Bernice (Krieg) and Leonard Schneider, Bob had a younger brother, Burton and sister-in-law Monna. He attended school in Grosse Pointe, while in high school played the tuba in the marching band and competed on the high school varsity tennis team. After serving two years in the army, during the Korean war, he graduated from Bowling Green State University, in 1956 with a degree in business administration. It was at Bowling Green that he met Shirley Browne of Wyandotte. After spotting her on the tennis court, he called one day and offered her a ride home that semester, officially beginning their 66-year relationship. They married in June of and moved to Saginaw, Michigan, where both their daughters were born. Bob began working as an auditor for the State of Michigan in 1956. In 1970, he took a position at the State Hospital in Traverse City, and the family relocated there. In 1991, he retired; and he and Shirley enjoyed many years traveling south for the winters. He was an avid tennis player from his youth well into his eighties and attempted to teach his daughters how to use top spin and two-handed backhands. He largely built two family homes; and singlehandedly transformed a mountain of gravel into a beautiful back yard over which Shirley planted a dazzling garden of flowers. A great example of hard work and perseverance, Bob had a kind and quiet spirit and a wonderful sense of humor. Rarely missing a day of work, he was seen going to the hospital on a sled down Wayne Hill when the roads were impassible. He insisted on shoveling the long driveway by hand. His admonishment that what you need is just a little outdoor exercise’ would ring in his daughter's ears always. In the years before the internet, Bob taught himself to read German and spent hours writing letters to churches in Germany seeking information on his ancestors. With the help of a friend, August Winter, who did the leg work in Nuremburg, he compiled an extensive genealogy reaching back to the 16th century. In 2010, he and Shirley traveled to Germany and met August and his wife, Silva. Bob’s later years were spent at Cordia Senior Living and then Cherry Hill Haven. He never lost his cheerful, kind spirit and sense of humor and was always interested in what others were doing even while dealing with his Parkinson's in later years. The family wants to recognize the wonderful staff at Cordia, Cherry Hill Haven, and Heartland Hospice for their love and kindness, as they worked with Bob, making his last few years of struggle happy and full of good humor. Bob was a beloved husband, father, and friend. He will be greatly missed. A Memorial Service will be held at 11am on October 16, 2021, The Reynolds-Jonkhoff Funeral home, 305 Sixth Street, Traverse City, Michigan, 49684. In lieu of flowers, please consider a gift to The Parkinson’s Foundation in Bob’s name. Kindly share thoughts and memories with his family at www.reynolds-jonkhoff.com.

The family of Robert Lee Schneider created this Life Tributes page to make it easy to share your memories.