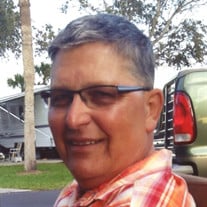 Robert William Warner (Bob) age 62, of Traverse City, Michigan, passed away at 8:30 a.m. on April 2, 2015, in Grand Rapids, Michigan after a long struggle with a chronic heart condition. Bob was born on November 23, 1952, in Traverse City, Michigan, to the late William and Mary (Broghamer) Warner. He was preceded in death by his sister, Deborah Eggli and Grandparents. Bob is survived by his high school sweet heart, Pamela (Brobeck) Warner, and his sons, Jason (Nicole) Warner and James (Flaminia) Warner. Bob has three beautiful grandchildren, Olivia, Chance, and Massimiliano. Bob is survived by his sister, Christine (Bruce) Hansen and by several uncles, nieces, and nephews. Bob grew up on Fern street with his two sisters’, Debbie and Chris, just down the street from his wife of 44 years. He decided to move “far” from home and build a house just a half a block away. Bob attended Traverses City Central High School, in 1971, where he played some baseball and football, before he learned about cars and motorcycles. He went to work at H Cox & Son where he spent the next 35 years and retired in 2014 as the General Manager. Bob had an incredible work ethic and enjoyed working, if fact he was always working, even at home. Even in retirement, Bob felt the need to work and worked with his family cutting lemons and cutting French fries. Bob loved to go with his family on Fishing trips and the regular camping trips to Florida to rest and relax. Until Bob’s health started to deteriorate, he enjoyed going on motorcycle trips with his friend Jeff. Bob found great pleasure in the Christmas season and would often leave his Christmas tree up until February because, as he used to say: “…when the tree comes down, Christmas is over, so why take it down!” Later in life, Bob, with declining health due to diabetes and Heart disease, learned to cook even with all the eating constraints. Bob loved to eat good food and took up cooking and was determined to still eat healthy while enjoying good food, the nice thing is he enjoyed cooking for all his loved ones as well. Bob truly enjoyed camping, hunting, and fishing and loved to be outside, so much so that he would regularly go for mushrooms with his mom and sister. Bob enjoyed “coaching” MSU basketball and Tigers’ baseball from his recliner; many times he would say: “that is it, I am not watching them anymore,” then he would be right back, cheering again the next day. On weekends, when he was not camping, he loved to have his grandkids over for camp fires in the backyard. In the last couple of years, he was able to spend extended time in Florida camping and fishing with his newly retired friends at Disney and Lake Okeechobee Florida. Most importantly, he loved family, a good time, a cigar, and a cold one, he would often say, “My boys… a cigar and a beer with my son and grand kids, this is living”. When the grandkids were not around Bob enjoyed hanging with his bud Harley D dog. The Mass of Christian Burial will be held on Tuesday April 7, at 11:00 a.m. at Immaculate Conception Church, located on 720 2nd Street, Traverse City, MI, 49684. Following the Church Service, a luncheon will be held at Immaculate Conception, prior to proceeding to the cemetery. The viewing will be held Monday April 6 from 4:00 p.m. to 7:00 p.m. at Reynolds Jonkhoff Funeral Home, with a Rosary to follow at 7 p.m. There will also be a viewing at Immaculate Conception on April 7, one hour prior to the funeral service at 10 a.m. Memorial donations can be directed to the Juvenile Diabetes Fund, 4595 Broadmoor Ave. SE. Ste. 230, Grand Rapids, MI 49512, and/or to the Renucci Hospitality House, 100 Michigan St NE, Grand Rapids, MI, 49503. The Renucci House is a wonderful organization within the Spectrum Health Clinic that provides a support service for families with loved ones who are sick, with long term illnesses, this includes a place to stay, home cooked meals, and a support staff while away from their home. The Warner’s would like to thank all our friends and family for their support through this difficult time. Finally, the family would like to acknowledge the Spectrum Critical Care Team, including all the nurses and staff, for their around the clock support during Bob’s long self-sacrificing battles with illness. "For God so loved the world that he gave his one and only Son, that whoever believes in him shall not perish but have eternal life. Please visit www.reynolds-jonkhoff.com to share your memories of Bob.

The family of Robert William Warner created this Life Tributes page to make it easy to share your memories.