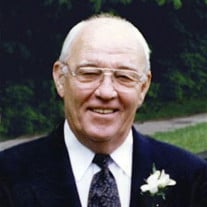 Robert Duane Yeiter, 91, of Traverse City passed away Tuesday, September 2, 2014 at Grand Traverse Pavilions in Traverse City. Born on July 11, 1923 to the late Orlo and Rosella (Curtiss) Yeiter in Grand Rapids, Bob graduated from Lowell High School in 1941 and enrolled in Michigan State College and joined the ROTC program. Bob’s ROTC unit was called up to active duty on December 9, 1942 and he transferred into the 505 Parachute Regiment of the 82nd Airborne Division of the United States Army. Bob’s military service included jumping in the pre-dawn hours of D-Day behind enemy lines where his Division was credited with liberating the 1st French city of the Allied invasion at Normandy. He fought in the Battle of the Bulge and numerous other battles in Holland before marching into Berlin. With the war in Europe officially over, the Allied forces were charged with occupying Berlin. During this occupation, the Army selected one person from the 82nd Airborne Division for educational training at the Ecole Hoteliere in Paris. Bob was chosen for this opportunity which reinforced his decision to pursue a career in the hospitality industry. Bob received two purple hearts and numerous other medals for his service to our country. Bob was discharged from the Army as a Tech Sargent on December 21, 1945 and then returned to college to graduate in 1947 with a Bachelor of Arts degree in Hotel and Restaurant Administration. After spending a winter helping to operate the Waterville Valley Ski Resort in New Hampshire, he became the manager of the Kent County Country Club in Grand Rapids. In 1952, Bob moved north to Traverse City and purchased the Villa Restaurant on East Grand Traverse Bay and renamed it “The Pinestead” (Home in the Pines). Bob owned and operated The Pinestead Restaurant through several major renovations and the successor Pinestead-Reef Resort until 1989 when he retired from the restaurant business. After his retirement, Bob and Jeannine opened a Bed and Breakfast (the “Hannah Beach House”) in their home for a few years. The B&B was named after the original owners, the Perry Hannah family. Bob was an active member of the Traverse City Chamber of Commerce for many years and worked to get the “Miracle Mile” designation for the mile of sugar-sand beach along the southern shore of East Bay. In the early history of Holiday Hills Ski Area, Bob helped clear trees for ski runs and was a stockholder of Holiday Hills for a period of time. Bob was a member of the Rotary Club since 1978, and served the club as Secretary for many years. As Secretary, he always looked forward to greeting the members for lunch every Tuesday. Bob was an avid hunter and fisherman. He enjoyed many fishing outings with his brother Sam and friends Jack and Kirby from Grand Rapids. Bob was especially fond of Mother’s Manistee Club and the group of fellow outdoorsmen who were members. He loved the years of camaraderie, fishing, hunting, fine wild-game meals, storytelling and the pranks they all enjoyed together. On May 20, 1955 he married the former Jeannine Sue Lute in Grand Rapids. Bob and Jeannine raised their 4 children in Traverse City. Bob is survived by his children, Curtiss R. (Christine) Yeiter of Traverse City, Robin D. (Michael) Noval of Los Angeles, CA, Michael J. (Mary) Long of Traverse City, and Tracey C. (Frank) Cusenza of Crystal Lake, IL. Also surviving are his grandchildren, Brian and Kelley Long, Josh and Corey Cusenza, Mason, Megan and Matthew (Marisa) Yeiter and a great grandson expected soon. He was preceded in death by his sister, brother and Jeannine his wife of 58 years. A time to visit with the family will take place from 10 am until 11 am Saturday, Sept. 13 at The Reynolds-Jonkhoff Funeral Home with a time of sharing and military rites beginning at 11 a.m. In lieu of flowers, memorial contributions may be directed to the Grand Traverse Pavilions Foundation, 1000 Pavilions Circle, Traverse City, MI 49684. Please share your memories and stories of Bob with his family by way of his online guest book at www.reynolds-jonkhoff.com . The family is being served by Reynolds-Jonkhoff Funeral Home and Cremation Services.

The family of Robert Duane Yeiter created this Life Tributes page to make it easy to share your memories.