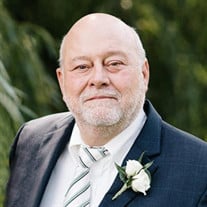 TO VIEW LIVESTREAM SERVICE AT 5PM VISIT: rjfh.tv Robert George Zimmerman, “BZ”, 72, of Traverse City, Michigan, passed away following a brief illness on October 15th, 2020. Bob was born on September 5th, 1948 to Robert and Laura (Meersseman) Zimmerman in Detroit, Michigan. After graduating from St. David High School in 1966, he earned his Bachelor of Business Administration from Wayne State University while a member of the Sigma Pi Fraternity. Bob started his career at the National Bank of Detroit. Upon moving to Traverse City in 1978, Bob worked in healthcare administration and finance before retiring as Vice President of Finance for Munson Healthcare in 2016. Bob was an active member of the local community and volunteered many years on the Board of Directors of Goodwill Industries. Bob is survived by his wife, Pamela, and his children, Kathy and John (Erin) Zimmerman, Kelli Acha, Rebecca Fleis, Holli (Patrick) McNally, Travis (Kassidy) Fleis, and his sister Sandra (Steve) Ruby. He is also survived by four grandchildren: Hunter Acha, Ben and Emma McNally and Henry Fleis. He was preceded in death by his parents, Robert and Laura Zimmerman and his beloved dog, Zoey. Bob wanted to be remembered as a person who lived his life with integrity. By close family and friends he was known as “The Glue”. He was a great giver of advice and support to any who needed it. Bob was known by all for his stories and sense of humor, and his close friends viewed him as family. Bob had many hobbies that he shared with friends and family: trivia, fishing, golfing, and squirrel hunting to name a few. Bob was an avid animal lover and dearly cherished his relationships with his pets throughout his life. The family requests that in lieu of flowers, donations be made to The Cherryland Humane Society of Traverse City, https://cherrylandhumane.org/donate/ Visitation will be held from 2-5PM, Monday, October 19, at Reynolds-Jonkhoff Funeral Home in Traverse City.

The family of Robert George Zimmerman created this Life Tributes page to make it easy to share your memories.