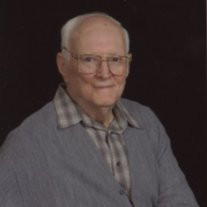 Williamsburg - Robert Sturt MacKinnon, 85 of Williamsburg passed away June 22, 2013 at his home. Robert was born on February 26, 1928 in Flint to the late Cecil and Mildred (Carpenter) MacKinnon. Robert served in the United States Army as a radio operator and as a member of the Military Police Force after World War II. He was honorably discharged in 1947. He attended Flint Junior College and Michigan State College. On June 7, 1952 Robert married Ellen M. Johnson in Flint and graduated from Michigan State the following day. Bob began a 31 year career with General Motors in 1953 in the Personnel Department. He then transferred to the Labor Relations department and spent most of his career as an Industrial Engineer. In the late 1980's Bob and Ellen moved to Traverse City. They joined the Traverse Bay United Methodist Church and have been active members ever since. Bob was also a member of the Clio Lions Club, a pack leader for Boy Scouts, and a Big Brother Volunteer. He had an excellent sense of humor. Bob loved Northern Michigan, and enjoyed each of the four seasons. Robert is survived by his wife of 61 years Ellen, son Robert, daughter Kathryn (Paul) Loiselle, son James S. (Barbara) MacKinnon, grandchildren Paige, Brooke, Cameron and Stephanie, step sister Martha (Richard) Whitmill, sister-in-law Karen Bloom and many nieces and nephews. Robert was preceded in death by his father Cecil and step-mother Mildred MacKinnon, mother Mildred and and step-father Jack Schuepferling, and sister and brother-in-law Kathryn (Kenneth) Nickoley. A memorial service will be held on August 3, 2013 at 1:00 pm at Traverse Bay United Methodist Church. Bob will be laid to rest at Great Lakes National Cemetery in Holly. In lieu of flowers, a donation may be made to the Salvation Army in Traverse City. Please visit www.reynolds-jonkhoff.com to share your condolences and memories with the family. The family is being served by the Reynolds-Jonkhoff Funeral Home and Cremation Services.

Williamsburg - Robert Sturt MacKinnon, 85 of Williamsburg passed away June 22, 2013 at his home. Robert was born on February 26, 1928 in Flint to the late Cecil and Mildred (Carpenter) MacKinnon. Robert served in the United States Army as... View Obituary & Service Information

The family of Robert "Bob" Sturt MacKinnon created this Life Tributes page to make it easy to share your memories.