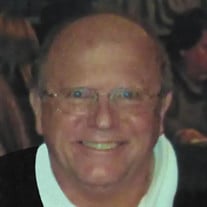 Beloved husband, brother and son Roen Lee Tharp, 67, of Traverse City, passed away on Thursday, May 25 after a month long battle with cancer. His loving wife Jo Rocheleau and his sister Ronda Tharp were by his side. Roen, who spent most of his life in Traverse City, was born to Ray Marvin Tharp and Virginia Marie (Bailey) Tharp in Lima, Ohio on November 28,1949. He received a bachelor's degree in education at Ferris State University and worked in the unemployment and disability departments for the state of Michigan for over 20 years until his retirement. Though Roen dealt with polio since the age of one, he never allowed his affliction to affect his outlook. Whenever someone walked in a room, Roen would make a point of getting to know that person and making them feel comfortable, armed with a smile, some questions about their life and maybe a joke or two.Roen tried to relate to people through small talk in a way that seemed effortless and was guided by a genuine interest in other people and their hopes and aspirations. He truly had a heart of gold. Roen was also an avid fisherman, was a fan of the Traverse City Beach Bums baseball team, played adaptive sports for people with disabilities, loved bike riding, enjoyed crossword puzzles and could play the accordion, flute, piccolo and guitar. He is survived by his wife Jo, whom he married August 18, 2012, siblings Ronda (Stan) Tharp, James (Mary) Tharp, William (Betty) Tharp and Valma (Dean) Davis, five nieces and nephews and 10 great nieces and nephews. He was preceded in death by his parents, his sister Lynette and his first wife of 30 years, Kathleen. The funeral service will be held Tuesday, June 6 at 11 a.m at St Mary's Catholic Church in Lake Leelanau, with a visitation at 10 a.m. A luncheon will immediately follow the service. Roen's final resting place will be Monroe Center Cemetery.In lieu of flowers those considering a donation may do so to the family. Please visit www.reynolds-jonkhoff.com to share your memories with the family. The family is being cared for by the Reynolds Jonkhoff Funeral Home and Cremation Services.

Beloved husband, brother and son Roen Lee Tharp, 67, of Traverse City, passed away on Thursday, May 25 after a month long battle with cancer. His loving wife Jo Rocheleau and his sister Ronda Tharp were by his side. Roen, who spent most of... View Obituary & Service Information

The family of Roen Lee Tharp created this Life Tributes page to make it easy to share your memories.