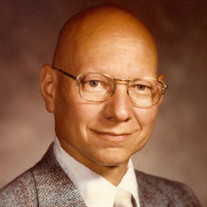 Roger L. Favorite, 89, of Interlochen, Michigan passed away on Monday, March 16, 2020 in St. George, Utah. Roger was born on March 21, 1930 in Springport, Michigan to the late William and Hilda (Baker) Favorite. He married the love of his life, Eleanor Swanson on March 19, 1955 in Traverse City. She preceded him in death on October 4, 2004. He proudly served his country in the U.S. Army. Roger had been employed as an accountant and a project analyst for Consumers Power. He retired in 1985 after over 33 years of service. He also retired from the Leelanau County Planning Commission. He was a member and former secretary of the Little Traverse Lake Association. He also volunteered at Interlochen Center for the Arts. Roger enjoyed building and re-modeling the homes his family lived in through the years. He also was always up for a challenge, whether physical or mental. He could race family and friends up Sleeping Bear Dunes in an afternoon, and win a game of Scrabble in the evening. In later years, Roger loved spending time at his home in St. George Utah, playing golf, attending plays, musicals, and concerts. Neighbors, family and friends referred to him as, “Mr. Fix-it”. He always had a helping hand for anyone in need and will truly be missed by many who knew him. Roger is survived by, his daughter, Peggy (Harold) Bertke and a dear friend and companion of 14 years, Shirley Royston. He was preceded in death by a son, Brian Favorite, as well as his sisters; Eleanor Palmer, Betty Shepard, Verna Favorite and Gwendolyn Felton. A celebration of Roger’s life will take place at 11:00 a.m., with visitation starting at 10:00 a.m., on Monday, June 22, 2020 at the Reynolds-Jonkhoff Funeral Home, 305 Sixth St., Traverse City, Michigan 49684. Pastor Chris Lane will officiate. Those planning an expression of sympathy may wish to consider a memorial donation to Interlochen Center for the Arts, Youth Haven or the charity of your choice. Please feel free to share your thoughts and memories with Roger’s family at his tribute page at www.reynolds-jonkhoff.com. The family is being cared for by the Reynolds-Jonkhoff Funeral Home and Cremation Services.

Roger L. Favorite, 89, of Interlochen, Michigan passed away on Monday, March 16, 2020 in St. George, Utah. Roger was born on March 21, 1930 in Springport, Michigan to the late William and Hilda (Baker) Favorite. He married the love of his life,... View Obituary & Service Information

The family of Roger L. Favorite created this Life Tributes page to make it easy to share your memories.

Roger L. Favorite, 89, of Interlochen, Michigan passed away on...