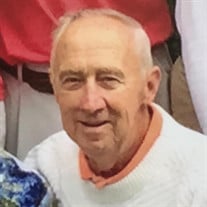 Roger Kabbes went home to rest on August 16, 2021. He was born in Cincinnati, Ohio on January 2, 1937, to Frank and Marie (Smithers) Kabbes as the third of five children. He graduated from Elder High School and went on to study drafting and construction through a co-op program at the University of Cincinnati. In 1964 he enlisted in the US Army and obtained the rank of Sergeant. In 1970, Roger married Helen (Helfferich Cizek) Kabbes and gracefully accepted the responsibility of not only becoming a husband but also an instant father to four young children between the ages of seven and twelve. Two years later Roger moved the family to Traverse City, Michigan to live in his childhood vacation cabin on Bass Lake. Over the next few months Roger worked weeknights and weekends to build his family a new home. Roger worked in construction his entire career, first as a carpenter and then moving up the ranks to a foreman, superintendent and eventually starting his own business as Bass Lake Builders. He established his customer base (long before the internet, google and cell phones) on the single principle that doing a good job and treating people fair would be all the advertising he needed. He designed and built many projects throughout the Grand Traverse region, both commercial and residential. Before retiring in 1999 he made time to build homes for his children. Roger was very proud of the things he built. Without question the best thing he ever built was his marriage and family. Roger frequently portrayed himself as a tough-love dad to his children. Often responding to ill-timed requests for unnecessary items with the phrase, “I’ll give you a (insert ill-timed requested item here) right in the nose!” However, behind that façade was a very humble, gentle, fair, and kind man who loved his wife and children without question. Throughout his life Roger enjoyed hunting, fishing, camping and golf (still the only member of his family to record a hole-in-one). He passed his enjoyment of these activities and a fraction of his carpentry skills on to his children. He smiled as he watched each of them grow in their own directions and establish their own lives. He was always there to provide practical knowledge and assistance. Though he had many titles throughout life his two favorites were simply, Husband and Dad. Roger was preceded in death by his parents, brother Matthew Kabbes, sisters Lois Poettker, Gail Schwettman, and grandson Stephen Cizek. He is survived by his wife of 51 loving years Helen Kabbes. Also surviving him are his brother Robert (Judy) Kabbes of Leesburg, Florida; children Greg (Julie) Cizek of Chapel Hill, NC; Randal (Betsy) Cizek of Highland, MI; Tom (Kate) Cizek of Traverse City, MI, and Donna (Mark) Stein of San Antonio, FL. Also surviving are grandchildren Caroline (AJ) Siegmann, David (Capri) Cizek, Elizabeth (Matt) Bruegge, Alexandra Cizek, Laura (Mike) Gorman, Donovan Cizek, and several great-grandchildren. Visitation will take place on Thursday, August 26, 2021, from 10am to 11am at Immaculate Conception Church in Traverse City. A Mass in celebration of Roger’s life will take place after the visitation with a meal immediately following. Donations may be made in Roger’s memory to the Munson Hospice House, Traverse City, MI. Arrangements for the family are being handled by Reynolds-Jonkhoff Funeral Home in Traverse City, Michigan.

Roger Kabbes went home to rest on August 16, 2021. He was born in Cincinnati, Ohio on January 2, 1937, to Frank and Marie (Smithers) Kabbes as the third of five children. He graduated from Elder High School and went on to study drafting and... View Obituary & Service Information

The family of Roger Allen Kabbes created this Life Tributes page to make it easy to share your memories.