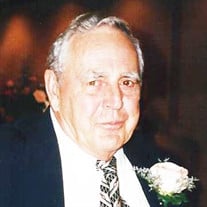 TRAVERSE CITY — Roman “Pat” Michalski passed away on June 21, 2015, at the Grand Traverse Pavilions. He was born in Detroit on March 29, 1920, to the late Leon and Blanche (Turkowski) Michalski. One of five children, he went on to marry Vivian Magiera on Oct. 14, 1944. They later had two children, Marilyn and Robert. Roman, a man of many words, had a real passion for life. His many talents included drawing (murals of Disney characters on basement walls) and singing opera for three years in the Detroit Civic Opera. He was a policeman all of his life, from a Detroit bank guard, to patrolman and Sergeant in Traverse City, and later retiring as a Lieutenant for the Albuquerque Sheriff’s Department. During this time, he also acquired a pilot’s license and a building contractors license. He built a motel, many spec homes and later developed property in the Sandia Mountains of Albuquerque, New Mexico. Roman is survived by his daughter, Marilyn (Richard) Bohn; grandchildren, Greg (Christine) Bohn, Christopher (Kim) Bohn; great-grandchildren, Ashley, Tyler, Alex, Sydney, Joseph and Josh; and many nieces and nephews. He was preceded in death by his wife, Vivian; son, Robert; parents, four siblings, Eleanor, Clem, Richard and Johnny. The family would like to extend a special thank you to Laura Penny, who gave so much love to Pat, Vivian and Bob over the years and to caregiver, Ted Bartleson. Also a big thank you of appreciation is extended to everyone at the Pavilions whose quality care gave Pat so much love and kindness during his last months. A private family service will be held in the future. A memorial donation in his name may be made to the charity of one’s choice or to the Traverse City Cherryland Humane Society. The family is being cared for by the Reynolds-Jonkhoff Funeral Home and Cremation.

The family of Roman Joseph Michalski created this Life Tributes page to make it easy to share your memories.