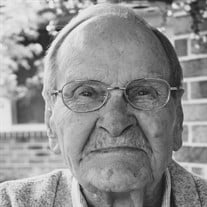 Traverse City will be missing one of its greatest Navy pilots and flight instructors. Our loving father, Ronald McKay Buller, passed away peacefully on July 21, 2018. He had a long and wonderful life. Ron was the third son of Mildred and Robert Buller born September 22nd, 1925 in Acme. Growing up he attended schools in Interlochen and Traverse City. After graduating from Traverse City High School in 1943, Ron enlisted in the Navy and dreamed of becoming a pilot. He earned his wings and was commissioned as a Navy pilot in 1946 in Corpus Christi, TX, after attending several flight schools. He served in the Navy for 23 years and was stationed mostly at Naval Air Stations in California. While stationed at Alameda Naval Air Station, he met and married Marcella Goldman in 1948. They had four children; Dave, Steve, Teri Jones, and Sue Austin, raising them in Alameda, Pensacola, San Diego, Coronado, and Fremont. One of his claims to fame was breaking the sound barrier (1.2 Mach) in a F9-8T Crusader jet while he was a Lieutenant Commander in 1961. He earned his Mach 1.6 pin in a Crusader before retiring in 1966. One of his most daring and exciting flights was flying his F8F Bearcat under the Deception Pass Bridge at Whidbey Island, Washington, in 1948. Even fifty years since he piloted an aircraft, Ron still spoke adamantly and fondly about the joys of flying and how much he loved and missed it. Ron’s second career after retiring from the Navy was in banking. He joined Crocker Bank and was promoted quickly as the bank manager at the main downtown branch in Hayward, CA. When his wife passed away in 1976, he decided to return to Traverse City. He joined the Elks Lodge and became their treasurer. He met a wonderful, witty woman, Jane Kildee. They married in 1980 and Jane’s children; Susie Janis, Patrick, Sandy Lindstrom, Lisa Lempke and Bill joined the blended family. Ron and Jane enjoyed traveling, bridge, and entertaining friends. Ron loved fishing in West Bay when the salmon were in. Ron was always impeccably dressed no matter what the occasion and always had an optimistic personality that will be sorely missed by all who were lucky enough to know him. Ron was preceded in death by his brothers; Ray, Dick, and Roger and grand-children Daniel Johnson and Julie Janis Finch. Ron is survived by his wife of 38 years, Jane, 9 children, 16 grandchildren, and 11 great grandchildren. A memorial service honoring Ron will take place at 11:00 a.m., with visitation one hour prior, on Thursday, August 16, 2018 at Grace Episcopal Church, 341 Washington St. Traverse City, MI 49684. The Rev. Kathryn Costas will officiate. In Lieu of flowers memorial gifts can be made to The Northwest Michigan Jesus Ministry, P.O Box 1408 Traverse City, MI 49685.

Traverse City will be missing one of its greatest Navy pilots and flight instructors. Our loving father, Ronald McKay Buller, passed away peacefully on July 21, 2018. He had a long and wonderful life. Ron was the third son of Mildred and Robert... View Obituary & Service Information

The family of Ronald McKay Buller created this Life Tributes page to make it easy to share your memories.

Traverse City will be missing one of its greatest Navy pilots...