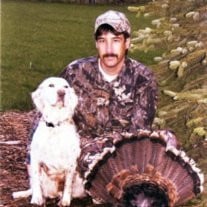 Ronald G. “Ron” Reffitt, Jr., 46, of Elk Rapids. On the morning of March 14, Ron was called home to be with our Lord. At the time of his passing, he was at Mayo Clinic’s St. Mary’s Hospital in Rochester, MN after recent treatment for reoccurring cancer. Born Saturday, December 31, 1966 in Grand Rapids, to Donna M. (Leazenby) and Ronald G. Reffitt Sr.; Ron moved with his family to the Torch Lake area at three years of age. He graduated from Elk Rapids High School in 1985. Ron began working at his family’s business, Peninsula Construction, when he was 16. He was a talented, skilled carpenter and appreciated the perfection of a job well done. Over the years, he built two homes for his family; working into the wee hours of the morning, oblivious to the time. He worked his way up in the family business becoming a key member of the sales team and co-partner with his brother, Kevin, upon their father’s retirement. Ron was an avid outdoorsman; enjoying hunting, fishing, biking and traveling. He loved nothing better than a Sunday drive in his truck. As he battled cancer over the last four years, he would make it a point to share his health story, inspiring others. Often, he would say that to manage the pain, you had to put your mind in a better place-which he did; never having a complaint, always having an upbeat attitude and a smile on his face. Above all, Ron sincerely loved his children, grandchildren, parents, brother, nieces, fiancée and her children. Ron is survived by his children, Jennifer (Brandon) Springstead of Rapid City, Ronald G. Reffitt, III of Kewadin, Cody Reffitt of Elk Rapids; his grandchildren, Blake, Tegan and Jaxon; his parents; Donna and Ron Reffitt, Sr.; his brother, Kevin (Dawn) Reffitt of Rapid City; his nieces, Kennedy, Cameron and Cassidy; his best friend and fiancée, Diane Campbell of Elk Rapids and his buddy, April. Also surviving is the mother of his children, Tami Reffitt. Ron was preceded in death by his grandparents. Visitation will be held at Bayview Wesleyan Church, 720 Wayne Street, Traverse City-- Tuesday, March 19 from 10 a.m.- 1 p.m. with the funeral service to begin at 1 p.m. with Rev. Gary Bekkering of First Congregational Church of Central Lake officiating. Burial will be held at Fairview Cemetery in Mancelona in the spring. The family has asked that Ron be remembered through memorial contributions to Mayo Clinic, 200 First St. SW, Rochester, MN 55905 (www.mayoclinic.org/development or to a charity of your choice. Please share your memories, stories and photos of Ron by visiting his online guest book/tribute page at www.reynolds-jonkhoff.com . The family is being served by Reynolds-Jonkhoff Funeral Home and Cremation Services.

Ronald G. “Ron” Reffitt, Jr., 46, of Elk Rapids. On the morning of March 14, Ron was called home to be with our Lord. At the time of his passing, he was at Mayo Clinic’s St. Mary’s Hospital in Rochester, MN after recent treatment for reoccurring... View Obituary & Service Information

The family of Ronald George Reffitt Jr. created this Life Tributes page to make it easy to share your memories.