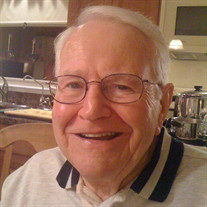 Ronald Osborne Stone, of Traverse City, Michigan, formerly of Romeo, Michigan, passed away on May 3, 2020, as the result of heart failure. He was 88 years old. Born on September 3, 1931 to Maurice and Nellie (Osborne) Stone, Ron was born in Bedford, OH and raised in Caro, Michigan. He attended Central Michigan University. He and his beloved wife, Arlene enjoyed a long and loving marriage, raising four boys together. Ron worked most of his career with Chrysler Financial, but also spent time with Ford and Allstate. Ron not only was a loving and devoted husband to Arlene, but a dedicated and caring father to their four sons. He was considered by all to be the model of fatherhood, marriage and Christian faith. Ron spent much of his time and efforts not only serving his wife and children – but first and foremost his dear Lord and Savior Jesus Christ, as shown by his lifelong involvement in and support of his church, missionaries, and discipling others to know Jesus. Ron was also a lifelong lover of music, spending much of his time playing trumpet for various bands early in life – but also enjoyed singing praises to God every Sunday in the choir where his prominent tenor voice could always be heard. Today Ron joins the greatest heavenly choir and is reunited with his favorite angel and duet partner, Arlene. Ron also served in the United States Navy from 1952-1955 and is a decorated veteran of the Korean War. Ron is survived by four sons; Tim (Laury), Todd (Jenny), Jeff (Carol) and Chris (Sonya), as well as nine grandchildren, six great-grandchildren, nieces and nephews, and many dear friends. In addition to Ron’s wife Arlene, he was predeceased by his sister, Evelyn Sparling. Because of the current world state, the family will not be able to receive any visitors or have traditional funeral services at this time. The family will however be scheduling a proper memorial service at a later date to honor this great Father, Grandfather, Husband, Soldier and man of God. A private burial service will occur at the Great Lakes National Cemetery in Holly, Michigan. Those wishing to make a memorial donation are encouraged to consider, The Salvation Army, 1239 Barlow Street, Traverse City, MI 49686 or, In Memory of Ronald Osborne, Terry and Helen Vanderwerf, #89850 Avant Ministries, 10,000 N. Oak Trafficway, Kansas City, MO, 64155.

Ronald Osborne Stone, of Traverse City, Michigan, formerly of Romeo, Michigan, passed away on May 3, 2020, as the result of heart failure. He was 88 years old. Born on September 3, 1931 to Maurice and Nellie (Osborne) Stone, Ron was born in... View Obituary & Service Information

The family of Ronald Osborne Stone created this Life Tributes page to make it easy to share your memories.