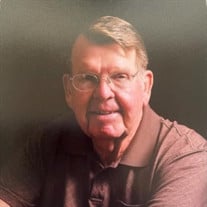 Ronald Edward Todd, 87, of Traverse City, passed away at his home on May 10, 2021 surrounded by his family. Ron was born on August 9, 1933 in Belding to the late Clarence and Agnes (Bruske) Todd. On June 15, 1957, Ron married Elizabeth "Betty" Svec in Traverse City and together they raised 4 children. Ron graduated from Central Michigan University where he earned his bachelor’s degree in Education and later a Masters from University of Michigan. At CMU Ron developed lifelong friendships while in Delta Sigma Pi Fraternity then becoming a diehard Central fan. These friendships lead to 60 years of get togethers “hi guy parties” and golf outings where Ron was fondly referred to as “Foxxy”. Ron served our country honorably as a member of the United States Army. While serving, he was stationed in Germany, where Betty joined him. They lived there for two years and really immersed themselves in the culture. Ron began his career as an educator for Royal Oak Schools as a teacher then as an administrator. He then moved his family to Traverse City in 1977 establishing The Pinery Furniture Store for 18 years before retiring. Ron loved wood working in his customized shop overlooking Long Lake, creating many beautiful pieces. Ron will also be remembered for love of the lake, sailing, boating, golf, devotion to his family, and faithfulness to the Catholic Church. Ron was preceded in death by his wife Elizabeth "Betty", son Michael and brother Dale. Ron is survived by his son Marc Todd; son Douglas (Karen) Todd; daughter Kristina (Eric) Weger; daughter-in-law Heidi Todd; grandchildren Robyn, Shaun, Amanda (David) Heather, Max (Jenny) Millie (Ray) Laura, Mark, Brendan, Kyle; great granddaughter Emma; sister Geraldine Jenks; brothers-in-law Albert, George and Charles Svec and many nieces and nephews. The funeral service celebrating Ron's life will be held on Saturday, May 15, 2021 at 11:00 am with visitation beginning one hour prior at St. Patrick's Catholic Church Traverse City, Michigan. Interment will follow at Grant Township Cemetery. Memorial contributions may be directed to St. Patrick Catholic Church Traverse City. Please visit www.reynolds-jonkhoff.com to share your memories and condolences with the family. The family would like to thank Comfort Keepers and Intell-icare Home Health and Hospice. They were both a port in the storm when needed.

Ronald Edward Todd, 87, of Traverse City, passed away at his home on May 10, 2021 surrounded by his family. Ron was born on August 9, 1933 in Belding to the late Clarence and Agnes (Bruske) Todd. On June 15, 1957, Ron married Elizabeth... View Obituary & Service Information

The family of Ronald Edward Todd created this Life Tributes page to make it easy to share your memories.

Ronald Edward Todd, 87, of Traverse City, passed away at his...