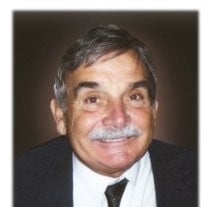 Ronald T. Tront, 71 of Williamsburg, passed away peacefully on Wednesday, July 17, 2013 at his home surrounded by his loving family. Ron was born on Febraury 5, 1942 in Detroit, MI to the late Joseph and Jennie (Romanowski) Tront. He married Dianna S. Hayden on July 5, 1975 in Bloomfield Hills, MI. Together they lovingly raised two wonderful children, Courtney and Aaron. Ron honorably served our country in the United States Army from 1960-1962 in Korea. Following his time in service he went to Wayne State University in Detroit and earned his Bachelor's degree. During his time in college he worked for UPS in many roles. Upon graduation he was promoted to Operations Manager of a UPS hub and eventually an entire district in the Metro Detroit area, where he retired after 29 dedicated years. Ron was a member of the Elks, The Grand Traverse Resort and Lochenheath. He loved computers, the beach, golfing, bow hunting and spending time with his family and friends. Ron was a wonderful husband and a devoted father always willing to help his family. His smile and loving spirit will be deeply missed by all who knew him. Surviving Ron is his wife of 38 years, Dianna, and children; Courtney Tront, and Aaron Tront SSgt, USAF. Ron was expecting his first grandchild in January of 2014. He is also survived by sister, Barbara (John) Stanisz, brother Richard Tront, sister Debra (Kevin) Switek, four grand-dogs and many other loving family members and friends. Visitation for Ron will take place on Saturday July 20, 2013 from 6-8pm at the Reynolds-Jonkhoff Funeral Home. A memorial service will be held on Sunday, July 21, 2013 at 2pm also at the funeral home. In lieu of flowers, memorial contributions may be directed to Hospice of Michigan. Please sign Ron’s online guestbook at www.reynolds-jonkhoff.com .

Ronald T. Tront, 71 of Williamsburg, passed away peacefully on Wednesday, July 17, 2013 at his home surrounded by his loving family. Ron was born on Febraury 5, 1942 in Detroit, MI to the late Joseph and Jennie (Romanowski) Tront. He married... View Obituary & Service Information

The family of Ronald T. Tront created this Life Tributes page to make it easy to share your memories.

Ronald T. Tront, 71 of Williamsburg, passed away peacefully on...