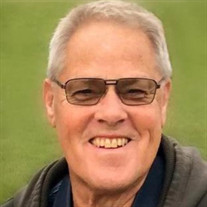 Ronald L. Underwood, 73, of Traverse City, passed away on Tuesday October 12, 2021 at Munson Medical Center. Ron was born on April 10, 1948 in Traverse City to the late Donald L. and Jean M. (Walkley) Underwood. In 1968, Ron married Sandra Chirko, together they had two children; Kelly and Heather. He later married Anita Marie Powell, she preceded him in death on July 8, 2006. Finding love again, Ron wed Dianne (Fillman) Brown on October 2, 2010. She survives him. Ron honorably served his country in the U.S. Army Reserves. He was a proud Traverse City businessman. He owned and operated, Skilled Manufacturing, Inc., for nearly 30 years, until his retirement. Previous employees you encounter say “he was the best boss ever”. Ron was a kid at heart and lived life to its fullest. His child-like enthusiasm came through in everything he did. He was a skilled handyman with a large array of tools/toys. He was always there to lend a helping hand to family, neighbors and friends, no matter the project. Over the course of his life, he flipped many homes and, in recent years, restored numerous motorhomes. He also enjoyed repairing and riding anything from a snowmobile, ATV to a jet ski. He had a great affection for all the local lakes as well as the Great Lakes. With Dianne, he gained a great appreciation for the Upper Peninsula and of the “Yooper” lifestyle, camping and exploring the place of her heritage. But, above all, spending time with his family, especially teasing and playing with his grandchildren, was his greatest joy. Ron is survived by his loving wife, Dianne, a son, Kelly (Jenny) Underwood, a daughter, Heather Underwood, two step-sons and two step-daughters; Robert (Julie) Powell, Michele (Rick) Vorce, Kristie (Jason) Lowetz and Michael (Sharon) Brown. Also surviving are 13 grandchildren; Alyssa, Megan, Justin, Brandon, So’nai, Dylan, Dallas, Braden, Gavin, Veronica, Vivienne, Maya and Zander as well as a brother, Robert (Janet) Underwood and a sister, Joanne (Doug) Gallagher. He was preceded in death by a brother, John Underwood and a sister Beverly (Larry) Stephenson. There will be a visitation from 2:00 to 4:00 p.m. on Sunday, October 17, 2021 at the Reynolds-Jonkhoff Funeral Home, 305 Sixth St., Traverse City, Michigan 49684. A Celebration of Ron’s life will take place at 11:00 a.m., with visitation starting at 10:00 a.m., on Monday, October 18, 2021 at East Bay Calvary Church, 2225 E. Hammond Rd., Traverse City, Michigan 49696. Pastor Brian Conover will officiate. Burial will follow in Grand Traverse Memorial Gardens. Military Honors will be conducted under the auspices of Cherryland V.F.W. post 2780 and American Legion post 35. Those planning an expression of sympathy may wish to consider a memorial donation to the American Diabetes Association Michigan, 20700 Civic Center Dr. #100, Southfield, MI 48076. Please feel free to share your thoughts and memories with Ron’s family at his tribute page at www.reynolds-jonkhoff.com. The family is being cared for by the Reynolds-Jonkhoff Funeral Home and Cremation Services.

The family of Ronald L. Underwood created this Life Tributes page to make it easy to share your memories.

Ronald L. Underwood, 73, of Traverse City, passed away on Tuesday...