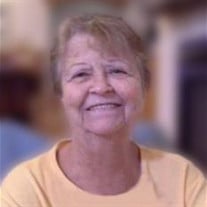 Rosalie Lillian Rennie, 76, passed away peacefully on Friday, May 20, 2016. Born to the late James and Lillian (Richardson) Griffiths on November 11, 1939 in Durango, CO, Rosalie entered the world with adventure in mind. After growing up, she moved to California and married, raising three wonderful children; William (Bill), Michael and Laura. She was an active member in the PTA at the school, always baking cakes and other sweets for the school carnivals and helping to make important improvements in the school to allow all the children to better succeed. In 1969, Rosalie and her family made a huge decision to travel cross country and lay down roots in Traverse City. Rosalie provided her children with many gifts. Gifts of her selflessness, understanding, compassion and the spirit to love unconditionally. She was always the first in the car to go on an adventure and made sure that she found a special trinket to bring home to remember the day. Often, multiple stops at garage sales topped the list for the day’s activities. Rosalie's eyes would light up and her heart would be full, knowing that she was spending the day with her grandchildren and great grandchildren. Every visit with them was a memorable one. She could make any ordinary moment into an extraordinary one. Her number one priority in life was caring for her family, but second to that spent time in retail, most notably at the Peanut Gallery and Wilhelm’s. In the community she was loved by many. Comments like "no stranger here" or "the sweetest lady I ever met" were just a few of the expressive statements to be heard. Rosalie would never pass up a dinner at Red Lobster and would never miss an episode of Wheel of Fortune. During the day if there was not a special outing to be had Rosalie could be found watching The Walton’s, likely an episode that she had seen many times, but still loved it like it was the first. For a two week vacation her sisters would come from California to enjoy the Northern Michigan area with their sister. They would shop, cook meals together and enjoy the company of one another, reminiscing about the good old days and sharing stories with the family. Rosalie is survived by her daughter Laura (Thomas) Phillips, sons William (Barbie) and Michael (Beth Morgan) Rennie, grandchildren; Brook (Joshua) Poniatowski, Jessica (Josh) Denzel, Alyssa (Drew) Elliot, Nicole (Anthony Fulk) Rennie, Allyson (Jake Eikey) Phillips and Matthew Phillips and great-grandchildren; Paige, Douglas, Izabella, Sophia, Katiana, Skyy, Nevaeh and Drew Jr., sisters; Pauline (Ward) Polandski, Betty (Dan) Sebastion, and Lisa (Steve) Miller and brother James Griffiths, special friend Kristine Yanska, as well as many nieces, nephews and close friends. She is preceded in death by both her parents, her grandson Aaron Rennie and her sister-in-law Barbara Griffiths. For a more lasting memorial instead of flowers the family would like you to consider a memorial contribution to the Muscular Dystrophy Association (MDA) PO Box 97075 Washington, DC 20077-7258 in Rosalie’s honor. Per the final wishes of Rosalie, cremation has taken place. There will be a private family gathering in September to celebrate Rosalie's life.

Rosalie Lillian Rennie, 76, passed away peacefully on Friday, May 20, 2016. Born to the late James and Lillian (Richardson) Griffiths on November 11, 1939 in Durango, CO, Rosalie entered the world with adventure in mind. After growing up,... View Obituary & Service Information

The family of Rosalie Lillian Rennie created this Life Tributes page to make it easy to share your memories.