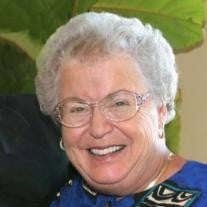 TRAVERSE CITY — Rose Marie Hitchens, 76, of Traverse City, passed away on Wednesday, May 2, 2012, at Grand Traverse Pavilions surrounded by her loving family. Rose Marie was born on April 11, 1936, to Alex Albert and Laura (Brideau) Albert in Detroit. She married Charles John Hitchens on May 3, 1958, also in Detroit. She was preceded in death by her husband, Charles, and her parents. Rose Marie and her family moved to Traverse City in 1970. She was the owner of Rose Marie's Hallmark, with locations in downtown Traverse City, the Cherryland Mall, the Park Place Hotel, the Bach Shops and the Grand Traverse Mall. She was active with Traverse City's Old Town Playhouse, performing in over 30 musicals. Rose Marie was a member of Immaculate Conception Parish, where she sang in the adult choir and served as a past president of the Women's Guild. Rose Marie also served on the board at Cedar Creek Commons for several years. She was a former member of the Traverse City Golf and Country Club and a member of the Traverse City Elks Lodge. Known for her competitive spirit, Rose Marie was an avid sports enthusiast competing in golf, softball, bowling, basketball, badminton, croquet tournaments and the occasional rubber duck race. Her greatest passion, however, was her family. Surviving Rose Marie are her children, Cheryl (Russell) Gallas, of Holland, Susan (Craig) Schuler, of The Villages, Fla., Chuck Hitchens, of Traverse City, Pat (Don) Rutt, of Traverse City, and Joanne Hitchens, of Traverse City; five grandchildren; three great-grandchildren; sister, Irene (George) Saylor Jr.; brother, Robert Albert; and many other loving family members and friends. Visitation for Rose Marie will be held today, May 6, 2012, at Reynolds-Jonkhoff Funeral Home, from 1 to 3 p.m., with a rosary recitation held at 3 p.m. A Mass of Christian Burial will take place at 11 a.m., with visitation one hour prior, on Monday, May 7, 2012, at Immaculate Conception Catholic Church. Memorial contributions may be made to Grand Traverse Pavilions or the Alzheimer's Association. Please sign Rose Marie's online guestbook at www.reynolds-jonkhoff.com. The family is being served by Reynolds-Jonkhoff Funeral Home.

The family of Rose Marie Hitchens created this Life Tributes page to make it easy to share your memories.