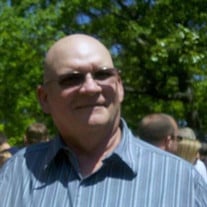 TRAVERSE CITY – Ross E. Moore, age 70, of Traverse City, passed away Wednesday, December 28, 2016 at Munson Medical Center. Ross was born January 12, 1946 in Pontiac, MI to John (Jack) and Jeanette (Young) Moore. Ross grew up in Waterford, MI and in 1964 graduated from Waterford High School. Following his graduation from high school, Ross attended Ferris State University where he studied printing production. He then served in the United States Army where he was stationed for two years in Washington, DC. Following his honorable discharge in 1968, Ross moved to Union Lake/Pontiac, MI. He later moved to Holly, MI where he raised his son and daughter Andy and Dana. Ross also lived with his family in West Branch, MI, where he was involved in Theatre with the Ogemaw Community Players. Ross moved to Traverse City, MI in 1993. Ross married Deborah (Smith) Moore on September 25, 2004. Together, Ross and Deborah shared many wonderful memories together, including two memorable trips to Walt Disney World and an inspiring vacation in the Grand Tetons in Wyoming. They also worked side by side over a number of years first designing and building their home in Benzie County. Ross was extremely skilled in woodworking, a gift put to good measure on his home with assorted handcrafted furniture and finishes. His artful handling of wood also gave expression to his strong faith in the form of inspirational pieces that pointed countless admirers to the Christ he so lovingly served. And when he was not creating something from the wood that filled his workshop, Ross was helping start and direct Men's Bible studies or looking forward to his annual guys-only fishing trip at Island View Camp in Missanabie, Ontario. A man of deep faith, Ross always embodied a warm, loving, and compassionate way about him to family, friends, and to all those he sought to share the wonder of his faith. To that end, and always with an eye on his eternal hope, whenever someone would ask Ross, “How are you?” he would simply reply, “I am absolutely fantastic, but I'll get better." Ross is survived by his wife, Deborah Moore, son, Andrew Moore, daughter, Dana Baughan, 7 grandchildren, 3 great-grandchildren, sister-in-law Mary Sue Moore, and brother Roger and his wife Sherry. Nephews and cousins. Deborah's children; Regan Urban, Carianne Franco, and 6 grandchildren. Ross is preceded in death by his parents, and brother, Terry Moore. A visitation for Ross will take place from 4:00 – 7:00 pm on Monday, January 2, 2016 at the Reynolds-Jonkhoff Funeral Home. Funeral services for Ross will take place on Tuesday, January 3, 2017 at the Mt. Zion Family Worship Church at 11:00 am with a visitation one hour prior. In lieu of flowers the family asks that memorial contributions be directed to, Mt. Zion Family Worship Center, 4950 Silver Pines Rd, Traverse City, MI 49685. Please share a memory with the family by visiting Ross’s tribute wall found at www.reynolds-jonkhoff.com. The Reynolds-Jonkhoff Funeral Home and Cremation Services is serving the family.

The family of Ross Edward Moore created this Life Tributes page to make it easy to share your memories.