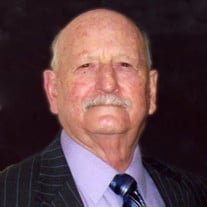 Traverse City - Roy Bernard, 88, of Traverse City, passed away Monday, September 24, 2018 at Munson Hospice House in Traverse City, surrounded by his loving family. Roy was born on Monday, December 16, 1929 to the late Delbert and Laura (Alexander) Bernard in Cavalle, Missouri. He completed high school and earned his Bachelors degree from Michigan State University. He honorably served our country as a member of the U. S. Army First Calvary in Korea. On Friday, September 7, 1979, Roy married the former Sandra Sanders in Traverse City. Roy worked for many years in the automotive industry in the position of administrator. He was employed by the Chet Swanson Dealership and then with the Otto Belovich Group. He continued to work in his office until the age of 87, enjoyed the shuffling of papers, he said, and also keeping up with the stock market and with his friends. Roy was a longtime member of Bible Baptist Church in Traverse City. He was impeccably dressed everyday with suit, shirt and tie. His family was his most treasured asset and his sense of humor was beyond measure. Surviving Roy is his wife of 39 years, Sandra; his children, John (Karen) Verschuren, Martha S Anderson, Kirsti (Stephen) Floyd;, 10 grandchildren, 7 great-grandchildren, and 1 great great-grandchild. Also surviving are his brothers, Donald (Marlene) Bernard. Darold (Barbara) Bernard, along with many other loving family members and friends. Roy was preceded in death by his parents and a brother Lacey (Pat) Bernard. Visitation for friends and family will be held from 10 until 11 A.M. Thursday, September 27 at Bible Baptist Church, 1915 Cass Rd, Traverse City. The Memorial Service will take place immediately following the visitation at 11:00 AM, also at the church, with Pastor Joel Brown officiating. A tribute to Roy’s military involvement will include a flag presentation following the service. Memorial contributions may be directed to 22-2-NONE, 526 W. 14th St., #106, Traverse City, MI 49684, a non-profit organization led by veterans to help raise awareness and provide support in an effort to combat veteran suicide (www.222none.org) or to Bible Baptist Church, 1915 Cass Rd., Traverse City, MI 49684 (www.biblebaptisttc.com )

The family of Roy Bernard created this Life Tributes page to make it easy to share your memories.