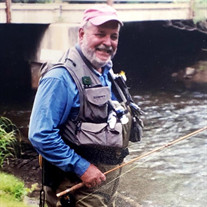 On November 25, 2021, Rudolph A Stimac passed away peacefully after a short battle with sudden health conditions. He went bravely without pain on to his next journey with his daughter Molly Nebeker by his side and his son Craig Stimac on the phone to say good-bye. He was 79. Rudy was born September 28th, 1942, in Detroit to Rudolph Sr. & Helen Stimac. Rudy, along with his older sister Barbara Gorecki & younger brother, Charlie (who precedes him), were raised in a loving ,tight knit Croatian family. In the 1950’s, the family packed up and moved up north to Wellston, Michigan, where they exchanged the city life for more of an off the grid lifestyle. Rudy and his siblings attended classes in Hoxeyville which had around 8 kids per grade. He has always had a thirst for knowledge, so upon entering high school, he chose to attend a larger school 30 miles away in Cadillac to improve his education in hopes of attending college. To save money and pay for college, Rudy joined the US Army in 1960. At the age of 19, he was promoted to E-5 sergeant representing the 1st Missile Battalion 4th Artillery. Rudy received numerous awards, including the First Class Missileman’s Badge, indicating his intricate knowledge of the complex Electronic Nike Hercules Fire Control equipment. Rudy and his section held the record for closest to target detonation for a surface to air strike with a distance of 6 feet. This was done in peace time between Korea and Vietnam. Towards the end of his military career, his commanding officer highly recommended him for appointment to US Military Academy and becoming an officer. Rudy had other plans and took an opportunity to attend the University of Detroit in 1963. He got his bachelor’s degree and went on to receive his MBA at Wayne State University, graduating Cum Laude. After college, Rudy’s first job was with National Bank of Detroit. In a short time, he became a loan officer, but shortly after he had an opportunity to move up north and join National Bank and Trust in Traverse City. He was promoted quickly. After a few years he decided to pursue a different career direction. Rudy went to work with EF Hutton (Morgan Stanley) in Traverse City as a financial advisor until he retired in 2010. In that same year, Rudy became a grandfather. His daughter Molly, her husband Jared and their son Jet moved back to Michigan to be closer to family. Rudy loved his retirement years with his family. As part of his new found time, he made an annual trip out West, to fish with his son Craig, who lives in Utah. He absolutely loved the game of football and rarely missed the home games of TC Trojans and St. Francis Gladiators football teams, sitting under the press box near the 50-yard line. In addition to Traverse City football, Rudy was a diehard University of Michigan football fan. He took pride and joy with his travels. He visited all fifty states along with several trips to Argentina, Slovenia, Mexico & The Bahamas. At all of these places he had his rod and reel in hand, dreaming of catching and releasing his favorite creature God created...the Trout. To know Rudy was to love him. This phrase gets overused sometimes but when we told a stranger about a story with Rudy, even that stranger had an immediate like of him. At this time, funeral services are being postponed until spring. They will be posted on his Facebook page. Mid May will hopefully be the timing of his memorial. Until then, go out and catch a big brown trout!

On November 25, 2021, Rudolph A Stimac passed away peacefully after a short battle with sudden health conditions. He went bravely without pain on to his next journey with his daughter Molly Nebeker by his side and his son Craig Stimac on the... View Obituary & Service Information

The family of Rudolph Alan Stimac created this Life Tributes page to make it easy to share your memories.