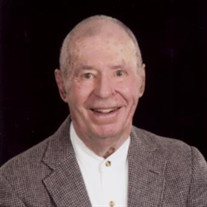 Russell V. Gilbert, 91, of Traverse City passed away December 22, 2021. Russell was born on October 15, 1930 in Elk Rapids to the late Russell F. and Marion L.(Jenny) Gilbert. On April 25, 1953, he married the former Gloria Jean Russell in Flint. Their marriage of 68 years was filled with much laughter, life and love. Russ enlisted in the U.S. Coast Guard in 1950 and worked his way up through the ranks, eventually achieving the title of Lieutenant. After serving for 22 years, he retired on August 1, 1972. He and Jean moved back to Traverse City where he was stationed from 1954 - 1957. Russ was very active and held many jobs. He worked for Dixon Distributing, was the Personnel and Labor Relations Director at the Traverse City Osteopathic Hospital, acted as Executive Director of the local chapter of the American Red Cross and taught many of their courses. Later he worked for Reynolds Jonkhoff Funeral Home and was the resident manager of the Hammond Place Condos and then worked at Elmbrook Golf Course while also playing in two leagues. He was a volunteer for both EMS and for twelve years at the Emergency Room at Munson Hospital. Russ and Jean enjoyed square dancing for some 25 years with the Rip Snorters Club. Many card games were played at their residence in Traverse City or Lady Lake, Florida. Russ was a past Master and 60 year member of East Bay Masonic Lodge #264, Acme, a member of the Saladin Shrine Temple and past President of the TC Shrine Club. He and Jean were also devoted members of Traverse Bay United Methodist Church. Russ valued his family, hard work and his country. You could count on Russ for help at any time. He was a man of many stories and was very entertaining. He worked hard, but also played hard. He enjoyed softball, football, golf and in his younger years refereed football and basketball. Golf was special though, especially in later years and in 1988 he had a hole in one at Elmbrook. Russ' children were the pride of his life. He was a kind, generous, loving and honest husband, father, grandfather and friend. He touched many lives and truly made the world a better place. He is survived by his wife Jean of Traverse City; three daughters Deborah (RIchard) Muyskens of Holland, Roxanne (Steve) Bathje of Wyoming and Cheryl (Todd) Brunsink of Phoenix; eleven grandchildren Elizabeth, Rachel, John, Pieter, Andrew, Tim, and Catriena Muyskens, Jennifer (Chad) Morris, Chris (Mary Beth) Bathje, Adam (Jared) Lewis, Ashley (Nate) White; great grandchildren Dylan, Caitlyn, Adelyn Morris, Emma Bathje, Nevaeh Kirkwood, Monroe Muyskens, Laylah Muyskens and Lilly White. Russ was preceded in death by his parents and sister Betty M. Mansfield. Visitation will be held on Friday, January 7, 2022 from 5 to 7 pm at the Reynolds Jonkhoff Funeral Home. The memorial service will be held on Saturday, January 8, 2022 at 3:00 pm with visitation beginning one hour prior also at the funeral home. Russ will receive full military honors from the Cherryland VFW Post #2780 and the Coast Guard Color Guard. Interment will take place at a later date at Grand Traverse Memorial Gardens. In lieu of flowers, memorials may be directed to Hospice of Michigan (10850 E. Traverse Hwy. Ste. 1155, 49684) or Shriner's Hospital for Kids (2211 North Oak Park Avenue, Chicago, IL, 60707). The family would like to thank the staff at French Manor Terra and Hospice of Michigan for the love and kindness to Russ.

The family of Russell V. Gilbert created this Life Tributes page to make it easy to share your memories.